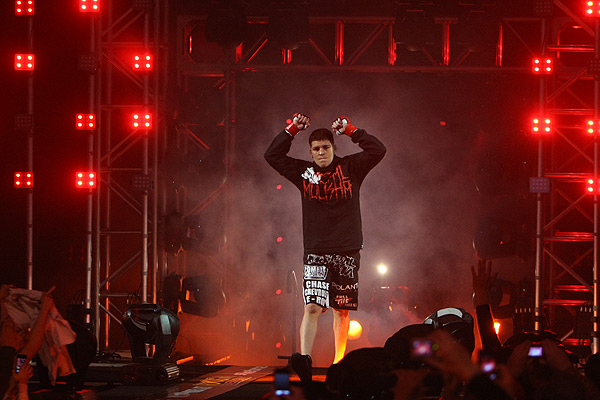 Many blogs are content to pump out reams of content about Ronda Rousey’s recent “say whatever-the-hell to get Twitter followers and crossover attention” campaigns on both Georges St. Pierre and the Sandy Hook tragedy. For as much as we love to trawl through small-town American newspapers for bizarre stories tangentially related to MMA, we at Sherdog.com also love to give you some real mind candy.

Saturday night came and went, and now Strikeforce has been put to pasture in perfunctory fashion. However, with the final Strikeforce card now in the books, the promotion's figurative record book has been cemented. That means we get to peruse some interesting number-crunching for historical and trivial purposes.

Both FightMetric and MMA Decisions have lovely statistical arrays for you to ogle and to contemplate whether they mean a damn thing. Here’s a selection of some of my favorite numeric morsels from both lovely lists:

-- Josh Thomson has the most Strikeforce fights, period? Truly shocking, if only because his tally of 13 would be considerably higher if he didn’t get injured before a half dozen Strikeforce fights. Also, James Terry and Billy freakin’ Evangelista are tied for third with 10? OK then.

-- Gilbert Melendez and Josh Thomson both spent over three hours fighting in Strikeforce. They spent 75 minutes fighting each other, specifically.

-- Cung Le had seven knockouts and 10 knockdowns. I think all of those came against Sam Morgan.

And, on that pure WTF tip, FightMetric wrote it better than I could:

“And finally, from the bizarre coincidence file: