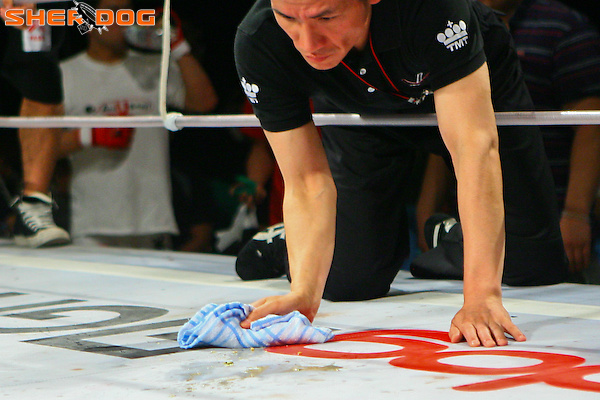 Having the good fortune to cover shows here in Japan, I witness a lot of interesting episodes that sometimes don’t make my 800-word fight reports. Thankfully though, we now have this new-fangled Sherdog blog, which makes it far easier for all of us on staff to share these fun MMA anecdotes.

I’m sure you’re all familiar with tales of fighters losing control of bodily functions in the ring or cage. Forum regulars have undoubtedly seen threads on fighters literally crapping their pants in the middle of a fight -- Tim Sylvia versus Assuerio Silva comes instantly to mind -- but until the recent Pancrase Changing Tour 3, I hadn’t heard of a fighter vomiting during a bout before.

In the second round of a Pancrase Gate prelim between Kazuyoshi Kiyama and Kensaku Nakamura, Kiyama landed a vicious kick to the body that made Nakamura double over and lose his lunch -- runny cream of chicken, by the look and consistency of it, with a primary splash radius of about 1 foot.

To give credit where credit is due, however, Nakamura transitioned for the takedown as soon as he took the kick. While his body may have failed him, his instincts did not.

Unfortunately for Nakamura, he didn’t have a chance to gut things out -- hah, see what I did there? -- and get back in the fight. Bug-eyed referee Yoshinori Umeki trounced all around the ring in his liquidy spew, yelling, “Stop! Stop! Stop!” As soon as Umeki raised Kiyama’s hand for the TKO, referee Tomoki Matsumiya was sent over with a rag and a bottle of alcohol to gingerly clean up what little chunks remained on the canvas. The show went on, and the quiet, somber crowd could not be denied their Kitaoka Achilles lock in the main event.

While it would be easy to point and laugh at this juncture, it’s more appropriate to remember that however rare, these things do happen. Performing at one’s best in front of a crowd is already a nerve-wracking proposition, and fighting in front of a crowd is exponentially so. Ill or injured, we’ve come to expect that fighters be paragons of strength and toughness -- to be otherwise would invite the ire of particular promoters, asking if, you know, these guys really want to be “f--king fighters.”

It’s a reasonable expectation for superheroes, but not so reasonable when we’re reminded that these guys are just as human as the rest of us. Cheers, Mr. Nakamura -- you got in there and you got your fight on, regardless of what unfortunate consequences lay ahead.

Besides, the fact that I actually got hit by Nakamura’s vomit, coupled by the death stare that his cornerman -- none other than rising featherweight star Michihiro Omigawa -- shot at us while Sherdog photographer Daniel Herbertson and I gabbed about it between fights is far more amusing, I think. If that’s part of the price we have to pay to be able to cover shows, I’m still totally down. Bring on the bloody chunks of tongue next -- a la former Sherdog Executive Editor Josh Gross at an Alex Karalexis bout. I’ll not only have another fun story to blog about, I’ll also have a souvenir to share with you all.