Sometimes, ugly is enough to get the job done.

Saturday, Nick Diaz needed five rounds and another blood-crusted face to best K.J. Noons nearly three years after a doctor stoppage gave Noons a win over him. Neither man was particularly graceful: Diaz could never quite slide into his volume punching that feels worse than it looks, and Noons was sometimes channeling Leonard Garcia in KO blows that he threw his entire body into.

It’s not that it was bad striking: it’s that MMA presents too many variables for that striking to ever be as tightly constructed as we see in higher-level boxing matches. Some are going to confuse that for inability, but you do what you have to when takedowns and kicks are part of the equation.

What else did the fight prove? Noons is probably one of MMA’s most skilled boxers, but he’s also undersized for the welterweight division: there’s a world of difference between his frame hitting you and a 185-pound man cutting down. But what he lacks in size he makes up for in speed and technique; Diaz posted one of his better career wins Saturday. The bad news? It might be one of the few remaining significant victories available to him currently in Strikeforce.

Next for Diaz: A rematch with Joe Riggs, even though it might be a snooze button; a middleweight fight with Cung Le, if Strikeforce wants some fireworks for a network show.

Next for Noons: Seeing what he’s made of against a takedown specialist like Josh Thomson. (Can’t avoid those wrestlers forever.) If he wants more at 170, Marius Zaromskis would be interesting.

Next for Marloes Coenen: Miesha Tate.

Next for Tyron Woodley: More grooming before anyone brings up the possibility of a title shot. 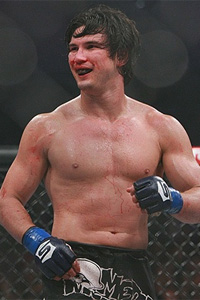 File Photo
K.J. Noons
Hairy Situation Award Shared by Mauro Ranallo and K.J. Noons, for spending more time with their bangs than on the task at hand.

Leave the Poor Guy Alone Already Award Strikeforce, for cornering Nick Diaz for a backstage interview in which he appeared to be addressing the carpet.

Dead Air Award Ranallo (and producers), for introducing at least ten different ringside fighters in what amounted to one of those Oscar-broadcast dead celebrity popularity contests. (Cung Le: big applause. Another: silence.)

The Truthiness in Victory Award Thomson, for scolding the judge who awarded him a 30-27 victory over Gesias “JZ” Cavalcante when most sighted observers could see Thomson lost the third round. When a fighter is telling you, the judge, that you’ve done a horrible job when you’ve awarded him the winner’s share of the purse, it’s time to regroup.


Is Diaz a better fit in Strikeforce than the UFC?

The difference? The UFC usually puts its fighters in the crosshairs of wrestlers that can stop an opponent’s momentum, both literally and figuratively. Outside of the promotion, Diaz has been able to showcase his striking against fighters willing to exchange with him.

Diaz has two bouts remaining on his Strikeforce contract: between the welterweight and middleweight divisions and the occasional trip to Japan, he probably has the ability to stay busy for years without running into blankets like Jon Fitch and Georges St. Pierre. And between Nate Diaz and Jake Shields both in the UFC’s 170-pound division, a Cesar Gracie pile-up would be inevitable. If he’s not hung up on beating top 10 welterweights, Diaz might be one of the few guys where a career outside of the UFC makes sense.

Showtime’s broadcast had barely wrapped up before reports circulated that Diaz and Jason “Mayhem” Miller -- who got into it during a CBS show earlier this year -- were grappling backstage; Strikeforce CEO Scott Coker said he wasn’t opposed to matching the two up.

So we’re clear: an in-cage mob scene that ended in fines and suspensions, cools CBS on MMA and manages to bleed over into another show months later should result in a payday for the fighters? Where is the incentive to conduct yourself like a professional?

Will judges ever be accountable?

At the conclusion of the Thomson/Cavalcante bout, judge Susan Thomas-Gitlin scored it 30-27 for Thomson -- an impossible thought when you consider that the third round saw Cavalcante throw, mount, and strike Thomson without suffering any kickback. Even Thomson was in disbelief at the scorecard.

It’s unlikely Thomas-Gitlin will ever be cornered and asked to articulate what she saw Thomson do in that round that earned him a 10-9 victory; some commissions believe a judge should be able to assess bouts without second-guessing media hounding them. It’s a nice thought, but when officiating has become so distanced from reality, regular conventions need to be tossed out the window. Judges should be asked to note on the cards why they believed a fighter won a round: “landed more effective strikes, two successful takedowns.” If that’s too much to ask, ask someone else to do the job.


• Noons broke his jaw in the first and his hand in the second. More accurately, Nick Diaz broke his jaw. That Noons kept it competitive for five rounds say something about his attrition.

• Sarah Kaufman seemed upset that new 135 pound women’s champion Marloes Coenen didn’t let go of her armbar submission right away, tension that later cooled in the locker room. The weight class looks like a good fit for Coenen, who has a long, rangy frame that she uses to tie opponents up well.

• Nate Diaz sported a UFC hat during his brother’s entrance, a small detail that’s still indicative that Strikeforce isn’t as savagely competitive with the UFC as the UFC is with everyone else.

• Yahoo’s Dave Meltzer reported a crowd of 7,473 fans in the HP Pavilion, a solid turnout for a San Jose show that was absent draws like Frank Shamrock or Cung Le -- and absent their substantial salaries.

• Thomson’s win over Cavalcante puts him in line for a third fight with Gilbert Melendez, but it’s the kind of fight that may shave a year or two off the already-hobbled Thomson’s career. These two are not good for one another from an orthopedic perspective.