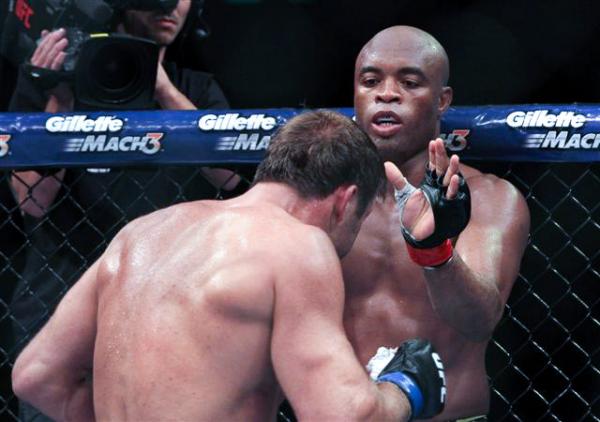 Anderson Silva is one of 16 finalists in ESPN Sports Science’s Greatest Athlete of All Time search. | File Photo: Sherdog.com


Longtime Ultimate Fighting Championship middleweight titleholder Anderson Silva is one of 16 finalists in ESPN Sports Science’s search for the Greatest Athlete of All Time.

Silva has held the UFC middleweight crown since Oct. 14, 2006, defending it a record 10 times. The 37-year-old Brazilian has never lost inside the Octagon, compiling a perfect 16-0 record. Fourteen of those wins have come by knockout, technical knockout or submission, seven of them inside one round. Silva last appeared in a non-title bout at UFC 153 in October, when he moved up to 205 pounds and dispatched Stephan Bonnar with a first-round knee strike to the solar plexus.

ESPN will unveil the winner of the first matchup -- Jordan vs. Woods -- on “SportsCenter” this Sunday. The Silva-Phelps winner will face the Jordan-Woods survivor in the quarterfinals.

Items of interest on the Sherdog.net forums this week:

Rarified Air for ‘The Spider’


Reader comments are active below.