After carefully piecing its product together over the last year and positioning itself to become a major player in international MMA, World Victory Road has finally cleared a major hurdle for its upstart promotion Sengoku by finally landing a network television deal.

The smallest of the six major Japanese terrestrial broadcasters, TV Tokyo is the broadcasting home of GCM's Cage Force series, as well as a consistent broadcaster of boxing in Japan. Sengoku's presence on the network will commence on Sept. 27, the day before its forthcoming middleweight tournament’s opening round, with an hour-long Sengoku preview show. Also running through October and November, TV Tokyo will broadcast 25-minute episodes of "Sengoku G!" -- a recap and digest show featuring the promotion's fighters and previous bouts.

While many acknowledge the historical relationship between Japanese pro-wrestling and MMA, the business side of Nihon's MMA industry also takes after the world of puroresu. In order for major-level MMA promotions to be successful and sustainable in Japan, a network television deal is a necessity. The point was most clearly depicted in the crushing fall from grace Pride Fighting Championships experienced following the loss of its television deal with Fuji TV in June 2006.

Since World Victory Road announced its arrival in MMA last October, the primary plotline for Sengoku's parent company has been its pursuit of a network television deal. After being turned away by the networks late last year, WVR has carefully crafted a television-friendly product with crossover appeal to the Japanese public, showcasing superstars such as Hidehiko Yoshida and Josh Barnett, Japanese "aces" like Takanori Gomi and Kazuo Misaki, and top BJJ converts such as Roger Gracie and Xande Ribeiro, while broadcasting its live events on pay-per-view via SkyPerfecTV!

While Sengoku has suffered from lackluster gate numbers, often only half-filling venues such as Yoyogi National Stadium First Gymnasium and Saitama Super Arena, WVR has staunchly maintained that terrestrial television was their ultimate goal.

"Terrestrial broadcasting is something that should generally make the fighters happy and motivate them, and it'll allow us to show the fans good fights," said Sengoku's chief superstar Hidehiko Yoshida. "For me personally, it's been a long while since I've been on terrestrial television. As such, I'll work hard to show good fights."

"Getting this TV deal so quickly like this makes me happy, as it'll be a good way to give exposure to normal folks," added the promotion's lightweight ace Takanori Gomi. "It's motivation for fighters who fight in Sengoku as well as younger guys aiming for it. Receiving the energy from the core fans who come to the arenas, out now to the folks at home, this expectation makes me want to answer that by fighting for them." 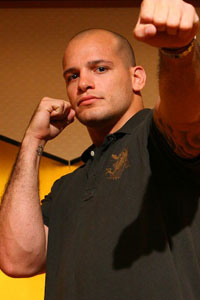 Daniel Herbertson/Sherdog.com
BJJ convert Xande Ribeiro could be
showcased on Japanese terrestrial TV.
It is crucial, however, to keep the announcement in proper context, as the announcement is more representative of a foot in the door rather than a full-scale coming out party.

Although they will have weekly network television presence, they will not enjoy primetime viewing, as the “Sengoku G!” episodes will be aired from 12:35-1 a.m. Furthermore, no announcements have been made regarding live, primetime network broadcasts of Sengoku events, which would be the financial ideal for the company. For promotions on network television, primetime advertising dollars are the truly sought-after commodity.

While Iida was measured in what he could reveal regarding the on-going negotiations between WVR and TV Tokyo, there was no question what the ultimate goal was.

"We have the special show in September, then we will have the regular show every week," said Iida. "But we're still negotiating. We are still hoping for live shows for the future."

In addition to its network television announcement, WVR announced the semifinal pairings for their Nov. 1 lightweight tournament finale at Saitama Super Arena, which will pit Satoru Kitaoka against Eiji Mitsuoka and Mizuto Hirota taking on Kazunori Yokota. The winners of the semifinals will meet in the finals later that evening, with the tournament winner taking on Takanori Gomi in the coming months to crown Sengoku's first lightweight champion.

WVR also announced the bout order for their Sept. 28 middleweight tournament opener at Yoyogi National Stadium First Gymnasium in Tokyo. The eight-fight card will be headlined by the MMA debut of grappling superstar Xande Ribeiro, who meets pro-wrestler and Pride veteran Takashi Sugiura.