With the final show now officially in the books, it’s only fitting that we take a look back at some of the matches that made World Extreme Cagefighting one of the pound-for-pound most exciting MMA organizations of all time. Below, in chronological order, are the top 10 bouts from WEC.

A pivotal match in the evolution of WEC, the ultra-violent opening chapter of the Polakowski-Alfonso trilogy gave fans reason to take note of the fledgling indy promotion during its first broadcast on HDNet. Polakowski may ultimately be remembered as the guy who hugged everyone on “The Ultimate Fighter 8,” and Alfonso as a man who was on the receiving end of some brutal knockouts, but for 15 minutes on that January night, the pair waged an unforgettable war. After accepting the match on just a few hours’ notice, the kickboxer Polakowski -- who competed in his muay Thai shorts -- almost ended the fight just seconds in, when he floored Alfonso with a hard right hand. Not only did Alfonso recover from the brink of consciousness, but after the countless knees and punches were all thrown, heel hooks were escaped from, the blood spattered and noses broken, Olaf had earned a split decision, prompting another pair of fights between the men over the next two years.

The main event of the last WEC card before the promotion’s purchase by Zuffa very nearly didn’t happen. Lightweight champion Franca arrived under the impression that his title defense would be three five-minute rounds, while the challenger Diaz had been told it was a five-round affair. Only a last-minute meeting with big brother Nick Diaz and a clandestine $12,000 paycheck got Nate to agree to a three-rounder -- though, in the end, it wouldn’t matter. The 21-year-old kid from Stockton got after the champion early, peppering with punches and drilling knees to the body of the purple-haired Brazilian as Diaz bullied the smaller Franca into the fence. After losing the first round decisively, Franca turned the tide by stuffing a Diaz guard-pull in the second and teeing off with punches from the top. Diaz survived to later drop Franca with a knee, but the Brazilian jiu-jitsu black belt latched on to Diaz’s left arm from his back and finished off his challenger with a lightning-quick armbar. 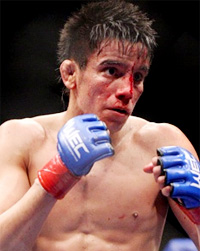 File Photo
Torres (above) was amazing at WEC 34.

Torres and Maeda’s blazingly-paced bantamweight title bout has become a touchstone for the burgeoning 135-pound division. The WEC champ and King of Pancrase went all-out from the jump, banging away with punches on the feet and engaging in a heated leglock battle on the floor. Torres would retain his belt after his stinging jabs accumulated to fracture Maeda’s right orbital bone, forcing referee Herb Dean to wave off the scheduled five-rounder after three incredible frames.

Condit and Miura sent the 170-pound class off in style with what would prove to be the final WEC welterweight title bout before the division was folded into the UFC. After a first round which featured crisp strikes, quick scrambles and an impressive Miura throw, the champion Condit slowly began to take over. Miura, however, was not to be put away easily, as he fought gamely through armbar attempts and escaped full mount in the third. Although he stormed back and dropped Condit early in the next frame, Miura succumbed to punches from the “Natural Born Killer” with less than 20 seconds to go in the fourth round.

For more than a month after it took place, the MMA world clamored to see Cerrone and McCullough’s action-packed WEC 36 undercard bout. Why? WEC had been forced to omit the “Fight of the Night” from the live Versus broadcast, instead showing a Jake Rosholt-Nissen Osterneck middleweight match due to a clause in Rosholt’s contract which guaranteed his fights would be televised. When Cerrone-McCullough aired on Dec. 28, as part of a “Best of 2008” special, all were treated to a late Christmas gift. The two accomplished muay Thai converts stood toe-to-toe and simply walloped one another for the majority of the fight, including a wild first stanza which Sherdog.com named 2008’s “Round of the Year.” When the match did hit the ground, McCullough impressively withstood back-mount and a mean-looking armbar attempt from Cerrone, who took a well-earned unanimous decision.