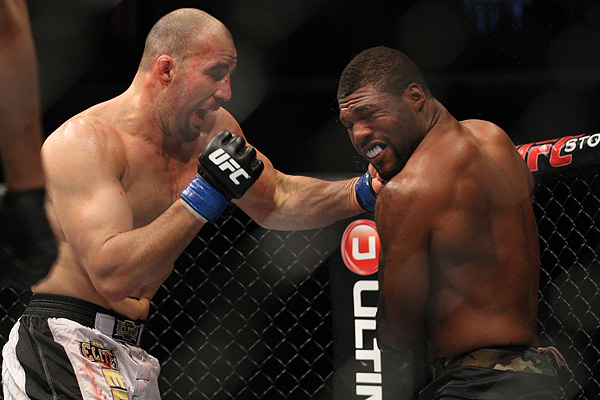 Glover Teixeira will enter the cage on a streak of 19 straight wins. | Photo: Dave Mandel/Sherdog.com


The Ultimate Fighting Championship’s whirlwind week draws to a close in Belo Horizonte, Brazil, on Wednesday, when a light heavyweight bout with serious pecking order implications tops the UFC Fight Night 28 bill. When a heavily hyped fighter like Glover Teixeira enters the Octagon and delivers on a consistent basis, it only serves to accelerate his path to a championship. Now, heading into the fifth bout of his UFC career, Teixeira is on the verge of reaching the heights many believed he could when his current 19-fight winning streak began to gather momentum.

Before Teixeira considers facing the Jon Jones-Alexander Gustafsson winner, however, he must dispose of Ryan Bader in proper No. 1 contender fashion. The Power MMA Team representative has served as a launching pad in the past, becoming the first victim in Jones’ memorable rise to prominence in 2011. Bader has been up and down since his loss to the reigning light heavyweight king -- an upset against Teixeira in a hostile environment would boost his stock considerably.

Here is a closer look at the UFC Fight Night 28 card, with analysis and picks:

The Matchup: As if he needed any more incentive to extend his 19-fight winning streak, the news coming out of the UFC 163 post-fight press conference was that Teixeira would be next in line for a light heavyweight title shot, provided he delivers an impressive performance against Bader. So far, the 33-year-old Brazilian has been outstanding, dominating Kyle Kingsbury, Fabio Maldonado, Quinton Jackson and James Te Huna in his first four Octagon appearances. Only “Rampage” was able to go the distance with Teixeira, but even their matchup was not especially competitive.

After beginning his UFC career with five consecutive victories, talks of Bader as a top contender have cooled somewhat, as the Power MMA Team representative has posted a .500 mark in his last six outings. While Bader remains a borderline top-10 talent and a solid measuring stick for anyone looking to make a splash in the division, a spotty chin and a limited offensive repertoire indicate the former NCAA All-American wrestler may have already hit his ceiling. He should continue to run roughshod over the Vladimir Matyushenkos and Jason Brilzes of the world, but if Teixeira backs up the hype yet again, then Bader could be in for a long night.

Bader gets a pass for losing to Jones -- after all, nobody has been able to topple the reigning 205-pound king -- but setbacks against Tito Ortiz and Lyoto Machida are points of concern when examining this matchup. Teixeira is extremely aggressive when it comes to pushing the pace and attacking with power punches, whether it is with hooks or uppercuts, and it seems unlikely that Bader’s beard can hold up in a prolonged firefight.

“The Ultimate Fighter 8” winner has decent boxing, including knockout power in his right hand, but he will be consistently outgunned on the feet, both in terms of speed and overall variety. Instead, Bader needs to use his jab to control range as best he can until he is ready to shoot; otherwise, Teixeira will close the distance and unload heavy strikes to the head and body. However, Bader has not proven himself to be the most patient of fighters -- witness the devastating counter KO loss to Machida -- so he may very well find himself baited into Teixeira’s kind of fight.

The problem: Teixeira’s kind of fight also extends to the ground. His ability to put opponents on the defensive with his heavy hands only makes takedown opportunities more plentiful; he averages more than three per 15 minutes, at a 75 percent success rate. Meanwhile, Bader’s 43-percent takedown accuracy suggests he is not always as efficient as his decorated wrestling background might suggest.

Additionally, Teixeira might look to attack with kicks to the legs and body to lessen the takedown threat. Even if “Darth” can force Teixeira to fight from his back, the ex-Shooto titlist is a Brazilian jiu-jitsu black belt, who, in theory, should be capable of sweeping or submitting from bottom. When Teixeira is in top position, he is just as relentless as he is on the feet, landing punches and elbows while working to move into mount.

The Pick: The chances of Bader winning the fight on the strength of a big right hand are low, so he needs to do his best to keep Teixeira grounded for as long as possible. Eventually the Brazilian’s unyielding pressure will be too much, however, as Teixeira softens up his man with a barrage of strikes to win either via TKO or submission in round two.