Carvalho will enter his UFC debut on the strength of a three-fight winning streak. | Photo: Stephen Martinez


While the six-month period of inactivity before Hioki provided a welcome opportunity to heal, Carvalho’s remaining time in Japan dwindled. With no fights on the horizon, he and Abe negotiated with Sustain for the next six months. He was notified a scant three weeks out from Shooto’s “Back to Our Roots 6” show that he would be facing Takaya, who was returning to Shooto from K-1 for a one-fight deal in order to get a win at featherweight and punch his ticket into the WEC. Discouraged that he was being treated as a stepping stone rather than heading for a third matchup with Hioki or a shot at then-champion Akitoshi Tamura -- particularly given his number one ranking in Shooto at the time -- Carvalho slowly became disenfranchised with the notion of making a career in Japan.

“In retrospect, I should’ve known better than to just show up and expect them to put me in fights. They clearly had their own plans and using me for the Takaya fight made sense given his plans, I guess, but it’s not like they wanted me there as much as I wanted to be there. I loved the idea of being a martial artist in Japan and being active in Shooto, but it just wasn’t meant to be. The fans, Abe and the folks at AACC supported me to no end and I love them for that, but me fighting there would be only on [the promoters’] terms,” explains Carvalho.

Carvalho took Takaya to the third round but, after suffering a knockdown, was warily watched by referee Taro Wakabayashi, who soon called the bout while “Pato” was defending against Takaya’s knees in the clinch. It is a call that, to this day, causes him to take a deep breath and shake his head in disapproval.

“I was defending and was never out. It was an important fight that, at the very least, I had the right to make it to the end,” he says.

Nonetheless, with the expiration of his visa and funds in Japan, Carvalho returned home to Canada immediately after. Despite being on the winning end of a 3-2 record in Shooto, the stubborn Carvalho felt he was not finished in Japan. What, after all, had he proved in leaving on a loss?

Troubles on Top of Troubles

Fighting career aside, there was also a somewhat stickier and more complicated matter for which he sought resolution: a girl with whom he had inadvertently become involved in his short time there.

“Like my original reasons for getting into MMA, returning to Japan to pursue the relationship was also for the wrong reasons. We both had different ideas of what we were to one another. I think part of what made the relationship attractive to her was that I was this exotic foreigner and that there was a definite end when I left. I wanted to try for a long-term relationship, so that was partly why I returned. It made for some very complicated times between us. I should have realized it just couldn’t work out and left it at that,” admits Carvalho. 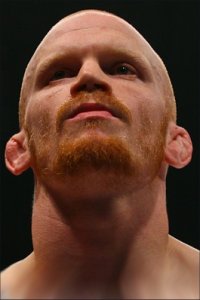 Joachim “Hellboy” Hansen File Photo
Hansen was a Godsend in Japan.
Thus, Carvalho was back in Japan a little over a month after his departure, this time having his visa sponsored by Greatest Common Multiple to compete in its 2008 Cage Force featherweight tournament.

Admittedly, his second attempt at living in Japan was far more difficult than his first, as his savings dwindled further. Being unable to fight regularly exacerbated that predicament.

“I was supposed to fight in the tournament several weeks after I returned, and that money would have been enough to keep me afloat, but things never go as planned, I guess. [Yuji] Hoshino pulled out with a rib injury, and, so, I didn’t get paid. I couldn’t even get my show money. But even with me asking for a small living allowance while they rescheduled the fight, they didn’t want to give me that, either. They offered to fly me home and back when they were ready, but that was more expensive than the living allowance I’d suggested,” says Carvalho.

Rather than sacrificing training time to take a full-time job teaching English like most non-Japanese visitors and fighters, Carvalho stretched his means to the limits. Undernourished and frustrated on both the career and romantic fronts, Carvalho trained harder and recklessly in the gym. His walk-around poundage dropped from the low 160s to 141 pounds, while old injuries resurfaced and new ones emerged. Without health insurance, Carvalho could not get the proper treatment for the potential nerve damage resulting from a neck compression and a dislocated right shoulder, both suffered while in training.

Further still, Carvalho began seeking out fights to pay his bills while waiting for his Cage Force appointment. Having participated in Shootboxing during his first stay, the “Standing Vale Tudo” promotion welcomed Carvalho back with the promise of supporting him in Japan in exchange for regular fights, going so far as offering to sponsor his visa extension. Unfortunately, the trip to the immigration office with Shootboxing officials revealed he would be ineligible given complications with his existing visa.

“Applying [for the extension] to that point went smoothly, so it came as a shock. GCM must have been mad at me for fighting in Shootboxing before my Cage Force fight. I only figured it out when I went to finish applying for the extension that my visa was canceled. I basically had to leave the country a month after fighting in the tournament and could not be sponsored by any employer after that. I understand why, but I also needed to fight to survive there. Shootboxing would have given me that ability where Cage Force didn’t,” says Carvalho.

The injuries, poverty, visa problems and troubled relationships all came to a head when he finally met Hoshino in the cage in June 2008. Severely low on motivation and essentially operating with a neck injury and only his left arm, “Pato” was soundly controlled by the Japanese fighter and lost by unanimous decision.

“I remember going to the venue that day, just not wanting to be there at all. I was injured, and my life was a mess. My manager and team back home were urging me not to fight, to just come home, rest up and refocus until I could find a way into either [the] WEC or Dream, but I’d made a promise, and I couldn’t bring myself to back out,” says Carvalho.

“I was so beat up physically and emotionally after that fight that I honestly didn’t think I’d fight again. I thought I was done. All that time, it was trouble on top of trouble, and then getting my deportation notice and the thing with the girl -- all of that just really hit me that night I lost to Hoshino. I remember walking out from the cage and looking over to her, and she had the coldest look I’ve ever seen. I thought to myself then, ‘What the hell did I do to myself? Why did I come back in the first place?’ That’s when it really hit me,” he adds.

While the purse from the Hoshino fight helped him pay his outstanding bills, Carvalho was still stuck in Japan, unable to afford a flight home, as GCM did not offer him a return ticket. By a stroke of luck, however, Carvalho soon reconnected with Joachim Hansen, whom he had met years earlier in Shooto. With Hansen returning as a reserve fighter in Dream’s lightweight tournament, Carvalho was officially made one of Hansen’s cornermen, guaranteeing him a ticket home one day before his deportation date. Though his stay in Japan ended on that high note, Carvalho acknowledges that living and fighting there brought him to uncomfortable limits and realizations about his life.

“In the end, it feels like they kinda won,” he concedes. “They didn’t exactly want me there and used me only so far as they needed me. I guess it sounds completely expected and natural now that you look at it, but, at the time, talking with fighters and promoters about honor and respect, you get sucked into these big ideas. In the end, it’s still really the fight game.”

In addition to being bound by notions of honor, respect and martial virtue, Carvalho’s stubbornness and desire to prove himself to his perceived doubters brought him to the brink of retirement. With naysayers claiming he would not amount to anything, Carvalho’s role in Japan ultimately amounted to “international flavor” for local promoters, a stepping stone for fellow featherweights scrambling to escape Japanese MMA and a brief but complex affair for one woman; a sobering lesson that some things just cannot be willed into existence.

“I still love JMMA, and my heart is still there, the same way it is for Darren [Uyenoyama] and for Joachim,” says Carvalho, with a wistful smile. “I won't ever forget the great fighters I followed, the many good people I met there and the good times I had with all of them, but it’s not a place I could have realistically lived and had a real career. I know that now.”

Since leaving Japan, Carvalho has been on a long road of physical, emotional and career rehabilitation. Coming back slowly into the sport as an instructor and training partner for his peers at Bruckmann Martial Arts, his eventual cage return saw three successful fights in his native Canada. The wins put him back on track and got him a call to fight in the UFC after he defeated Octagon veteran Doug Evans in June.

“I somehow managed to get into the UFC. Did I originally think I would’ve made it? No. I was surprised and grateful when they did call me, though. You don’t say no to that,” Carvalho says, with a chuckle.

“
I’ve always said I got into
MMA for the wrong reasons.
I was an angry kid, and I think
that burden is what pushed
me towards it. I think it drove
me a little too much.

“Even then, though, I didn’t even make it to my first fight, since, again, injury reared its ugly head,” he adds, pointing to his missed debut against Yuri Alcantara at UFC 134 in August. “The old me would have taken the fight anyway, but since I’m 32 now, I’m an old man in the sport, and the way the younger guys fight now, the UFC is not a place you want to leave things to chance. More than my time in Japan, being in the UFC is my time to be at my best.”

Just over three years later, Carvalho has finally arrived, not just in the UFC, but to a fuller, better understanding of who he is and what he is capable of. Given the trials and travails life has thrown at him and the resulting psychological hurdles with which he has since come to terms, being mistaken for not being a fighter seems the least of his worries. This is actually right where he wants to be since, in truth, he really does “do UFC” now. Come Jan. 14, being in the Octagon will provide him with all the validation he needs.