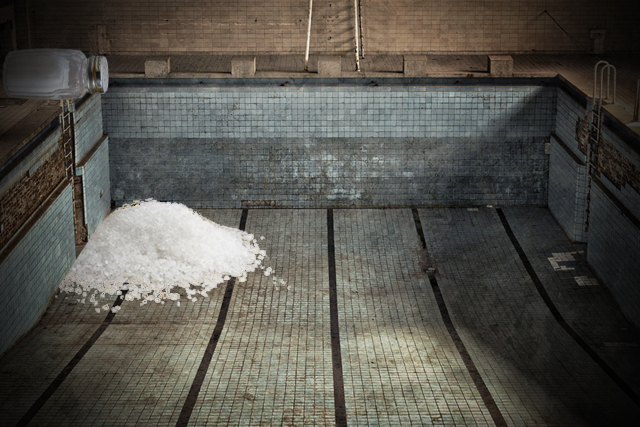 Editor’s note: The views and opinions expressed below are those of the author and do not necessarily reflect the views of Sherdog.com, its affiliates and sponsors or its parent company, Evolve Media.

Is anyone else sick yet of hearing about picograms and swimming pools? It has been less than a week since those terms became the buzzwords of our sport -- I told my word processor months ago to stop trying to correct turinabol -- and my fatigue with it is already sky-high. However, before we all move on to the next thing, whatever that is, I’ve got an entire Olympic-sized pool full of salt to shovel. Will you join me?

The irony is that I should be the last person railing about performance-enhancing drugs in MMA, because I think most of them should be allowed. I’m not envisioning a sport full of bricked-up monsters, either; most of what the pre-United States Anti-Doping Agency era gave us was fewer fights derailed by training injuries or blown weight cuts, and yes, maybe a few bricked-up monsters. Yet here I am railing nonetheless, because while I don’t care about steroids, I do care about consistency and transparency: I think soccer kicks should be legal and hope the Unified Rules are revised one day to allow them, but that doesn’t mean I think a fighter who soccer kicks someone this Saturday should face no consequences.

This isn’t really about steroids, though. The true takeaway from this week is the extent of the Ultimate Fighting Championship’s lack of regard for just about anything or anyone but a tiny handful of fighters. It was evident in the relocation of UFC 232, a move that accommodated Jon Jones but was a complete middle finger to every other fighter on the card, the fans and media. It was evident in UFC Vice President Jeff Novitsky’s mealy mouthed embarrassment of an interview on “The Joe Rogan Experience” this week, of which the most charitable thing I can think to say is that in spite of Novitsky’s best efforts we managed to learn a few truths. It was evident in Thursday’s press conference, one of the most combative and frankly baffling events of its kind ever to take place.

Taken in combination, these things tell us that not only does the sport’s No. 1 promotion not care much about its customers or the vast majority of its fighters, but it’s not even very interested anymore in putting up the appearance of caring. That increasingly brazen disregard is the real story and would be largely the same whether Jones’ particular issue was steroids, recreational drugs, legal problems or anything else that might affect his ability to be licensed.

To some degree this is not news, but the scale of the dishonesty and injustice makes it feel new. The UFC’s history of bending its own rules for the benefit of its stars is well-established. Just think of Brock Lesnar’s fast-track clearance to fight at UFC 200. However, where previous examples of that favoritism generally affected only one or two other fighters -- the opponent or perhaps the fighter who would otherwise have gotten that booking -- the move of UFC 232 from Las Vegas to Los Angeles sent a crystal-clear message to 25 fighters, their teams and their fans: Jones is more important to us than all of you put together, and we don’t care who knows it.

The UFC has had a combative relationship with the media for decades, so it was not surprising on Thursday to hear UFC President Dana White snap back at Sherdog’s Anthony Walker with “Who’s gonna pay my [California] income taxes?” though it’s certainly one of the most let-them-eat-cake moments of his tenure. Jones has been prickly with reporters since right around the time of his first suspension, so it was not surprising to hear him insult and refuse to answer the Swedish journalist who asked him a valid question. I remember him doing the same to Luke Thomas a couple of years ago. Once again, however, the difference is of degree. Jones’ dismissal of the woman was far nastier than a simple “I don’t like you, Luke, so I’m not going to answer,” and this time Jones was immediately backed up by White, who berated her, as well. Again, the message was unmistakable: Ask Jones a question he doesn’t like, and not only is he free to insult you for it, but his boss will show instant solidarity. Even the pretense of professionalism is slipping away, to a degree that was not evident two or three years ago.


Let’s talk about them. My kid brother Paul, who is somehow both younger and wiser than I, once told me he thought of them as two similar but separate types of people, and it has always stuck with me. Both are people who tell falsehoods when it’s expedient, but a liar knows the truth and tells you something false. A bulls---ter doesn’t know the truth and tells you whatever he likes because he assumes you don’t know the truth, either. In some ways, the latter is more pernicious, because it implies that the truth doesn’t matter as long as there’s nobody to call it out.

White lies sometimes. You know it, he knows it, I know it, and to an extent, I don’t even hold it against him. He’s a salesman. His primary job is to get people to buy his company’s product, and the tools he has with which to do it are his words. From exaggeration and hyperbole to outright duplicity there is a continuum, and what’s in between is more of a gradient than a hard line between black and white. More importantly, because everyone knows where White is coming from, lying is almost as reliable as telling the truth. Just as one example, media dutifully reported it years ago when he proclaimed that Jones would never headline another card, but fans and reporters alike decoded the message immediately: I’m really mad at Jones and it will probably be a while before he headlines another card.

Novitsky’s appearance on the “JRE,” on the other hand, carried most of the hallmarks of a bulls---ter. In that hour-plus segment -- which is probably the apex of “picogram fatigue,” by the way -- Novitsky made few directly falsifiable statements. What he did instead of lie was attempt to tear down the credibility of the facts as well as the credibility of the process, even when it meant putting himself right on the railroad tracks. “I’m not an expert” on PED testing, the UFC’s designated expert on PED testing said. “It’s an inexact science,” he said of analysis that can detect -- say it with me, now -- a grain of salt in an Olympic-sized pool. “Be real careful if you’re going to be the guy with the pseudoscience out there,” he said of those who might claim Jones’ rising level of metabolites implied continued ingestion. At every turn, the motivation was to muddy the water and to create doubt.

What of the idea that Novitsky’s interest was fairness to Jones and reluctance to punish him in the face of what he wants us to believe is inconclusive evidence? It’s worth noting that one prominent voice to speak up this week was Frank Mir, who was given a stiff suspension for a situation glaringly similar to that of Jones. Both had similar trace amounts of the same drug -- picograms per milliliter, by the way, which are now supposed to be insignificant -- showing up in tests long after an initial positive test, with the athlete claiming he had not continued to use it. Even if Novitsky’s goal was to be fair to Jones, it’s that brand of UFC “fairness” that is not offered to just anyone.

The saddest thing about it is that I agree with Novitsky: He isn’t an expert, at least not in the sense of being a chemist himself. Who else cropped up in the storm of public commentary this week? Lance Armstrong. Why? Because Novitsky came to fame in the first place for blowing cycling’s PED culture wide open, with Armstrong’s greatest-of-all-time legacy one of the most prominent casualties. Novitsky did that without being an expert; he did it with remarkable tenacity and the strength of his word. To see a man once infamous for rooting through athletes’ garbage for evidence reduced to proclaiming that there’s just no way to really know what urinalysis results mean is depressingly cowardly.

I’ve seen backlash on social media in a similar vein to Novitsky’s studied know-nothing stance; people claiming that to condemn the UFC’s treatment of Jones and UFC 232 is uncalled for without understanding the complexities of the testing. I could not disagree more strongly. I am not an expert on PED testing, and I don’t want to be. I didn’t get into this sport to learn about picograms or swimming pools or the practice of cutting mibolerone with turinabol. However, when the people purporting to explain them to me are such transparent liars and bulls---ters, I have the right to demand better answers and not be shouted down for it, and I certainly have the right to take their justifications with a grain of salt.

We are a participant in the Amazon Services LLC Associates Program, an affiliate advertising program designed to provide a means for us to earn fees by linking to Amazon.com and affiliated sites.