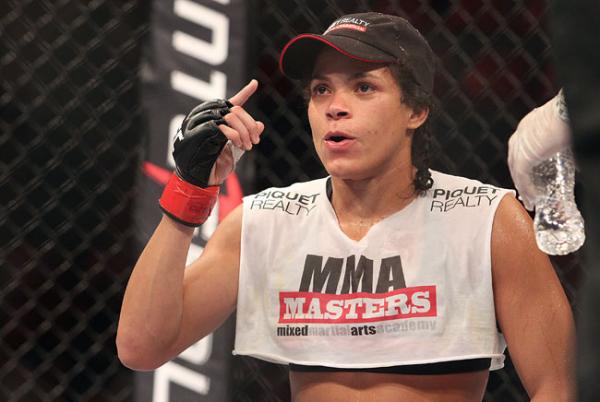 Amanda Nunes has momentum on her side. | Photo: Gleidson Venga/Sherdog.com


Sometimes to get where you want to be in life, you have to go out on a limb and take a chance. Amanda Nunes made such a move in 2011, when she relocated to the United States from her native Brazil. To say it has paid off would be an understatement, as she has emerged as one of the top contenders to the throne of Ultimate Fighting Championship women’s bantamweight titleholder Ronda Rousey.

“Coming to the U.S. was a pretty easy decision for me because my family supported me, and I knew I needed to do it to get better in my training and to get more exposure,” Nunes told Sherdog.com. “My family has always supported what I do. Once I decided to go to America, I tried to learn everything I could about the country. I’ve adapted to everything well, I think.”

Nunes was born in a rural part of the state of Bahia in Brazil. She rode horses but also wandered into trouble and got into fights -- until she was introduced to capoeira by her uncle, who happened to be a vale tudo fighter.

“When I was a little, I had a lot of energy,” the 27-year-old Nunes said. “I got into a lot of fights, but when I went to capoeira, I had a hard coach and he disciplined me. When I went to class, I behaved and respected the coach. The discipline in class helped me a lot. When I tried other sports, I didn’t have as much energy because I spent so much energy on capoeira. Eventually, I started doing jiu-jitsu and judo. After I started practicing martial arts, I was a new kid.”

Along with capoeira, jiu-jitsu and judo, Nunes took up boxing at the age of 16, but she admits her striking did not start to fully progress until she committed to becoming a mixed martial artist. 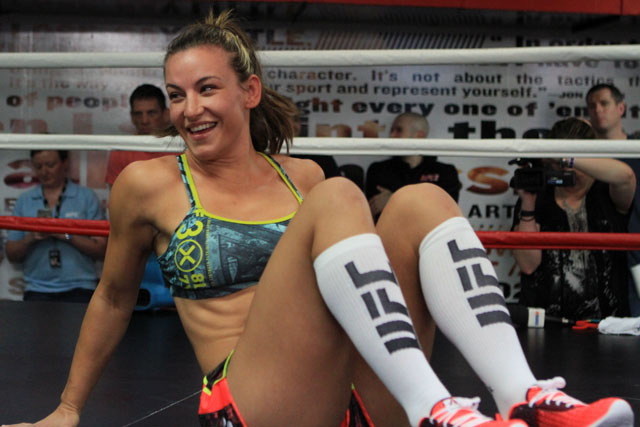 (+ Enlarge) | Photo: Jeff Sherwood/Sherdog.com
Tate could be next.
“My real background was in jiu-jitsu,” Nunes said. “I really started learning striking after I started training for MMA. A lot of people think I came from a striking background when I was little, but I didn’t really learn striking until after I was doing Brazilian jiu-jitsu and judo. When I started thinking about fighting MMA, that was when I really started training BJJ and judo.”

Nunes took her first professional MMA fight at age 19, and her career got off to an inauspicious start, as she tapped to an Ana Maria armbar in 35 seconds at a Prime MMA Championship event in Brazil in March 2008. However, she rebounded from the loss to post five straight wins from May 2008 to February 2010. In 2011, despite not knowing much English, Nunes decided to make the move to the U.S. to train under Edson Carvalho in New Jersey.

“He brought me to the U.S.,” Nunes said. “He really should get credit for making this possible. He had a gym in New Jersey and Brazil. I started training with him in Brazil and everything was going good and I was winning fights in Brazil, so they told me I should come to America and start fighting and stuff.”

Nunes -- who has finished all 11 of her professional wins, with nine knockouts and two submissions -- made her Strikeforce debut in January 2011 with a 14-second knockout of Julia Budd. She succumbed to second-round punches from Alexis Davis eight months later and eventually agreed to terms with Invicta Fighting Championships, where she submitted Raquel Pa’aluhi with a rear-naked choke at Invicta 2.

Following a decision loss to Sarah D’Alelio in January 2013, Nunes suffered an arm injury but nevertheless signed with the Ultimate Fighting Championship and made her Octagon debut with a stirring first-round knockout of Sheila Gaff at UFC 163. Another first-round knockout followed, this one against Germaine de Randamie, and moved Nunes further up in the women’s bantamweight pecking order. However, a third-round technical knockout loss to the then-unbeaten Cat Zingano at UFC 178 sent the “Lioness” back to the drawing board.

As part of her recalibration, Nunes moved to American Top Team in Coconut Creek, Fla., where she has been training for some seven months. She admits the switch was based more on the camp’s reputation than on a personal connection.

“I didn’t know anybody from there,” said Nunes, who has gone the distance only once in 15 professional fights, “but I always heard great things about American Top Team, so I went there. I really like their gym.” 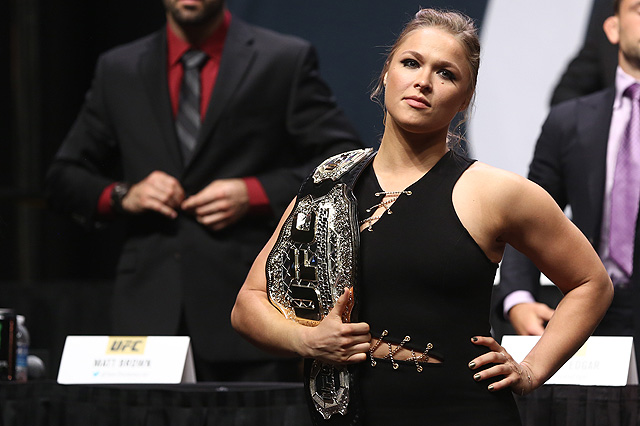 (+ Enlarge) | Photo: Dave Mandel/Sherdog.com
Rousey looks unstoppable.
After the change in training camps, Nunes rebounded with a first-round stoppage of Shayna Baszler at a UFC Fight Night event in March and then announced her arrival as a potential title contender on Aug. 8, when she submitted Olympic silver medalist Sara McMann in a little less than three minutes. Against McMann, Nunes used her potent standup to set up the fight-ending rear-naked choke and improve her UFC record to 4-1.

“I was fortunate,” said Nunes, who holds the rank of black belt in Brazilian jiu-jitsu and brown belt in judo. “I’m so confident in all of my game right now. I’m so confident with my takedown defense and what my striking coach has been teaching me. I’m strong and so confident with my hands. Everything went exactly like I wanted, and I did very well. My game plan worked so well, and that’s why I did so well in that fight. The focus in training and [American Top Team] made me a better fighter, too. I feel so much better when I have that confidence. I feel like I fight well because I’m so confident.”

Following a brief post-McMann respite, Nunes has already set her sights on her next target: two-time title challenger Miesha Tate. A bout between the two is rumored to be in the works for December.