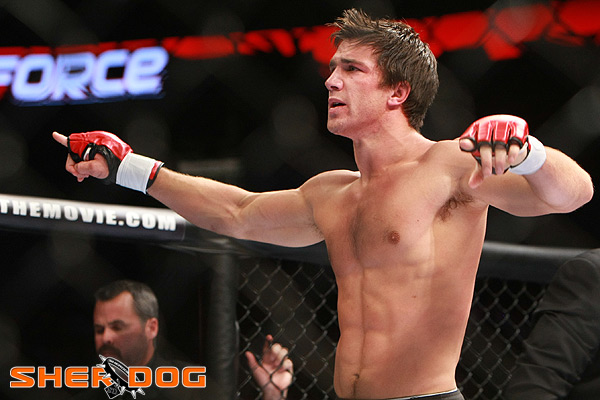 So far, July has been all about the middleweights, and Luke Rockhold didn’t want to miss out on the fun. While the American Kickboxing Academy product didn’t emulate the dominant victories by UFC 185-pound king Anderson Silva and top prospect Chris Weidman days earlier, he did manage to retain his Strikeforce middleweight strap by defeating the hard-nosed Tim Kennedy in the Strikeforce “Rockhold vs. Kennedy” headliner on Saturday night.

Rockhold used superior reach and quickness to outland Kennedy on the feet while stuffing the majority of the Jackson’s MMA representative’s takedowns at the Rose Garden in Portland, Ore., solidifying his spot as the promotion’s top middleweight. Also, Nate Marquardt made a triumphant return to the cage, knocking out Tyron Woodley in the fourth round of their co-main event clash to capture the promotion’s vacant welterweight crown. Here is a by-the-numbers look at Strikeforce “Rockhold vs. Kennedy,” with statistics courtesy of FightMetric.com.

18: Total strikes by which Rockhold outlanded Kennedy in retaining his middleweight title. The American Kickboxing Academy fighter connected on 70 of 159 strikes in the 25-minute affair, while Kennedy landed 52 of his 119 strikes.

.170: Takedown percentage for Kennedy, who was only able to ground Rockhold once each in the third and fifth rounds. His normal takedown success rate is 32 percent.

24 minutes and 26 seconds: Difference in time between Rockhold’s two decision triumphs -- against Kennedy and Souza -- and his other nine professional bouts, all of which ended in the first round.

483: Days off for Marquardt before he defeated Woodley to earn the vacant Strikeforce welterweight crown. Marquardt’s last fight came at UFC 128, a unanimous decision victory over Dan Miller.

39: Total strikes landed by Woodley in the third round. The St. Louis native also scored a knockdown and outlanded his opponent by 20 strikes in the frame.

.580: Significant striking accuracy for Marquardt, who threw at least 20 strikes in each round before stopping Woodley with elbows to the head in the clinch in round four. In the decisive stanza, “The Great” connected on 70 percent of his significant strikes.

Keith Jardine File Photo
Jardine has never been submitted.
24-3: Record for Marquardt in bouts that end via knockout, technical knockout or submission. The Coloradoan is just 8-7 in contests that go the distance.

30: Professional bouts without being submitted in the career of Keith Jardine. The Jackson’s Mixed Martial Arts product survived several precarious positions and two submission attempts in his unanimous decision loss to Roger Gracie on Saturday night. However, Gracie outlanded Jardine 35 to 7 in significant strikes and took “The Dean of Mean” down three times in the middleweight bout.

48: Weight cut in pounds endured by Lorenz Larkin to make the 185-pound middleweight limit. “The Monsoon” told Showtime that he weighed 233 pounds when he began his cut. Larkin’s previous four fights with Strikeforce were contested at light heavyweight.

26: Significant strikes by which Larkin outlanded knockout artist Robbie Lawler in a decision win. It was the greatest striking disparity of the 18 Lawler fights in the UFC, Strikeforce, Pride and EliteXC that have been documented by FightMetric.com, though Renato Sobral outlanded Lawler by 21 significant strikes at Strikeforce “Los Angeles” in 2010.

202: Total strikes thrown by Pat Healy in his decision triumph over Mizuto Hirota. The Team Quest fighter stayed busy throughout the contest in earning his fifth consecutive win under the Strikeforce banner, peaking with 90 strikes thrown in round two. Overall, “Bam Bam” outlanded his foe by 56 total strikes.

7: Consecutive bouts involving Jorge Masvidal that have gone the distance, dating back to a split-decision defeat to Luis Palomino on Feb. 4, 2010. All four of “Gamebred’s” recent Strikeforce bouts have gone to the judges, including his victory over Justin Wilcox on Saturday night.

15: Takedowns successfully defended by Masvidal. Wilcox landed only two of his takedown attempts in his split-decision defeat to the American Top Team member, going 1 for 7 in round one, 0 for 4 in round two and 1 for 6 in round three.

34: Advantage in significant strikes for Masvidal, who outlanded Wilcox in every round. He was most effective in the opening stanza, landing 26 strikes to his opponent’s nine.

92: Significant strikes landed by Jordan Mein in his three-round verdict against Tyler Stinson. The 22-year-old Canadian Martial Arts Centre representative landed at least 30 strikes in each frame to rebound from a split-decision defeat to Tyron Woodley in January, a bout where he landed just nine significant strikes.

7-0: Record for Jason High since his lone UFC appearance, a unanimous decision loss to Charlie Brenneman in 2010. “The Kansas City Bandit” submitted Nate Moore with a guillotine choke in 26 seconds for his first victory of 2012.