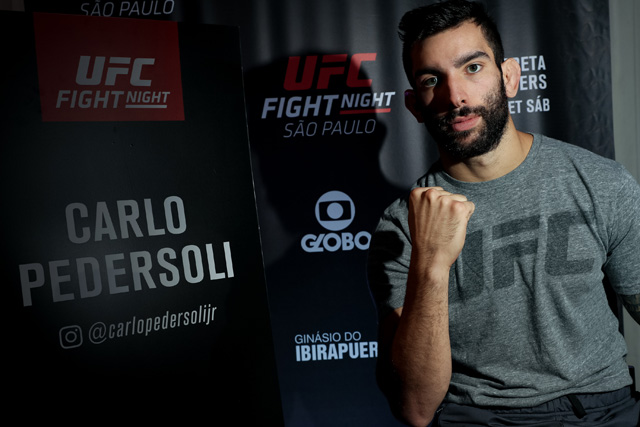 You can sign up for a free seven-day trial of ESPN+ right here, and you can then stream UFC on ESPN+ live on your computer, phone, tablet or streaming device via the ESPN app.

Carlo Pedersoli Jr. will enter the Octagon for the third time at UFC Fight Night 145, at the O2 Arena in Prague, Czech Republic. This will be the latest chapter in the story of his pursuit to one day be recognized as the face of Italian mixed martial arts in the Ultimate Fighting Championship.

Pedersoli Jr., 25, considers himself a new era fighter. Although he earned a blue belt in both karate and judo as a pre-teen, he became a fully-realized mixed martial artist when he started taking boxing and MMA classes at the age of 16. “You could say I come from karate [and] judo, but I really come from MMA,” the fighter told Sherdog.

Starting out with a mixed base, as opposed to traditional martial arts, has become a common trend with many current fighters. However, that was not the case a decade ago. Yet this sport evolves quickly, and as the industry grew, so has combat sports in Italy. “I think the Italian MMA scene is ready to do well [abroad],” said Pedersoli Jr. “Because in my city [Rome], there are many professional gyms. Also, in Italy, there are many MMA teams ready to show what they can do [on the world stage].”

For many fans of the sport, Italian MMA can be summed up in one name: Alessio Sakara. The man known as “Legionarius” has been the standard bearer for fighters from Italy during his 17-year career that’s included stops in both the UFC and Bellator MMA. Although the 37 year-old has headlined recent Italian events for Bellator, his career is bound to end sooner rather than later, which will leave a void in the market. Looking to fill it is Pedersoli Jr., who has long wished to one day take up the mantle.

“This is my wish for me [and] my career. I want to become the face of Italy in MMA,” said the fighter nicknamed “Semento.” If not him, he says teammate Alessio Di Chirico has the same dream. Meaning as two of the three Italian fighters currently on the UFC roster, the Gloria Fight Center gym has a great chance to house the next face of the sport in Italy.

Pedersoli Jr.’s appreciation of his country and its burgeoning MMA scene runs deep. As many fighters from around the world leave their home to train in the United States, don’t expect to count him as the next. Although he has had short stints at Florida gym Hardknocks 365 recently, Rome will always be the headquarters of most, if not all of his camps.

“I think it’s better to prepare for a fight [at home],” said Semento. “With all the facilities, with all the accommodations of your [home]. But it’s also good to bring in other fighters [to train with],” said Pedersoli Jr. He firmly believes Italy has high-level training and is equal to other MMA hotspots around the globe. “I don’t think Italy has anything less than other countries.”

Pedersoli Jr. says he gets challenged in sparring by his fellow Italian fighters. However, if there are any stylistic shortcomings in local training partners, he can remedy the situation by bringing in fighters from neighboring nations like England and Finland. “It’s good to have people [from] around the world training with me,” admitted the fighter. “But it’s not good for me to travel and prepare the fight outside [of Italy].” In preparation for his bout Saturday night against Dwight Grant, he enlisted the help of Cage Warriors welterweight champion Ross Houston and former UFC welterweight Craig White.

To continue on his path towards becoming the leading representative of Italian MMA, he will need to bounce back from only the second defeat of his 13-fight career. At UFC Fight Night 137 in September, Pedersoli Jr. saw a great opportunity in facing veteran welterweight Alex Oliveira, despite it being on three weeks’ notice. “I like to accept challenges. I knew at the time it was a dangerous fight because Oliviera was top-15 ranked,” said the fighter. His assessment was correct, and unfortunately for him, Oliveira stunned the Italian 39 seconds into the bout and won via knockout.

Looking back, “Semento” does admit maybe three weeks wasn’t enough to take on a fighter of that caliber. However, he does not regret the decision, as he views the defeat as the nature of fight sports. “It’s part of the game. It’s a sport that you have a [50-50 chance] to win or to lose. It’s not like a soccer game or tennis. This job is very dangerous, so you accept that you can lose [or] you can win,” said Pedersoli Jr. “I prepare to win [and] destroy my opponent every time, but we are in the UFC. This is the place where you meet the best fighters in the world.” Despite the crushing loss, he still believes he has what it takes to beat the Brazilian. “I’m sure I can beat Oliveira. This time [didn’t go well], maybe next time.”

Coming off a loss, and a split-decision victory in his debut against Bradley Scott at UFC Fight Night 130, there could be a thought that Pedersoli Jr. not only needs to win but to impress in his bout with Grant. Just to keep his spot on the roster in good standing. The Cage Warriors veteran doesn’t feel any added pressure to be exciting since he feels his style naturally lends itself towards being entertaining.

“I think the UFC liked my first fight. I don’t know; I think I did well. I don’t need to look to find the KO or the submission [against Grant]. I think I’m exciting when I fight, so I will try to do my best and I think people, [and] the UFC, will enjoy my typing of fighting,” Pedersoli Jr. says.

The Italian has confidence the fight with Grant will entertain, not because he is being hopeful, but because he genuinely likes the matchup stylistically. “I think Dwight Grant is a great opponent [and a] good fighter,” said Pedersoli Jr. “This will be a great fight for me. I’m prepared [and] I will demonstrate I am a high-level fighter.”