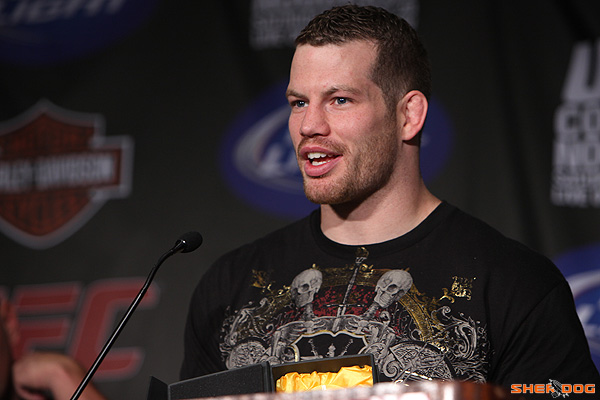 Somewhere in all the hullaballoo over testosterone replacement therapy, his release by the Ultimate Fighting Championship and a 16-month absence from the cage, people lost sight of Nate Marquardt.

Marquardt captured the vacant Strikeforce welterweight championship with a stirring fourth-round knockout against the previously unbeaten Tyron Woodley in the Strikeforce “Rockhold vs. Kennedy” co-main event on Saturday at the Rose Garden in Portland, Ore. His debut at 170 pounds could not have gone much better, as it brought back memories of similarly dynamic finishes against Wilson Gouveia and Martin Kampmann.

A former middleweight King of Pancrase, Marquardt brought the fight to Woodley, belted the two-time All-American repeatedly with right hands and appeared to be in front on the scorecards entering the fourth round. There, Marquardt pinned the St. Louis native to the cage, unleashed three wicked standing elbows and closed the deal with a left hook and savage right uppercut.

What comes next for Marquardt when considering Strikeforce’s shallow roster remains anyone’s guess, but no man seems more deserving than Jason High. The 2009 Dream welterweight grand prix finalist, though he was relegated to dark match duty, recorded his seventh straight victory with a 26-second guillotine choke-induced submission against the American Kickboxing Academy’s Nate Moore.

High has not lost since being released by the Ultimate Fighting Championship following a unanimous decision defeat to AMA Fight Club’s Charlie Brenneman in March 2010.

In wake of Strikeforce “Rockhold vs. Kennedy,” here are five other matchups that need to be made:

Luke Rockhold vs. Lorenz Larkin: Rockhold belongs in the UFC, but until he fields the call to the Octagon, the 27-year-old Californian will continue to occupy his time with defending the Strikeforce middleweight crown. Rockhold retained his title with a unanimous decision over Tim Kennedy and moves on to new challenges. Larkin was superb in his first appearance at 185 pounds, showing no ill effects from the weight cut in his unanimous decision victory over former EliteXC champion Robbie Lawler. A dynamic striker who has worked diligently to shore up the soft spots in his game, Larkin has put himself in position to challenge for promotional gold.

Gilbert Melendez File Photo
Melendez has a new challenger.
Gilbert Melendez vs. Pat Healy: Like Rockhold, Melendez looks like an extremely big fish in an increasingly smaller pond. Rumors of a possible fourth bout with Josh Thomson -- a man Melendez has already beaten twice -- have been floated, but Healy has kept his name on the short list of potential suitors for some time now. On a five-fight winning streak, the resurgent 28-year-old snatched a unanimous decision from Deep champion Mizuto Hirota in another blue-collar performance. Healy cannot match Melendez’s athleticism and ability, but few at 155 pounds can equal the Team Quest veteran’s grit and determination.

Tim Kennedy vs. Ronaldo “Jacare” Souza-Derek Brunson loser: Kennedy has failed in two bids to capture the Strikeforce middleweight championship, and odds seem long that he will get another opportunity. Still, in a division that lacks both depth and quality, he remains a valuable piece of the Strikeforce puzzle. “Jacare” and the once-beaten Brunson will toe the line against one another next month in San Diego, and Kennedy, who lost to Souza by unanimous decision in August 2010, would be in prime position to challenge the loser.

Tyron Woodley vs. Evangelista “Cyborg” Santos: Woodley received the rudest of awakenings against Marquardt, a man with four times as much professional mixed martial arts experience. Even so, the two-time NCAA All-American wrestler possesses seemingly unlimited physical potential and, at age 30, plenty of time to tap into it. Woodley’s lack of aggression against Marquardt, particularly on the feet, cost him dearly and will need to be resolved if the American Top Team representative ever wants to reach the heights that were once forecast for him. “Cyborg” has not set foot in the cage since he was on the receiving end of a savage series of standing elbows from Jordan Mein nearly a year ago. He could serve as a worthy hurdle, as Woodley attempts to rebound from the first setback of his career.

Roger Gracie vs. Ronaldo “Jacare” Souza-Derek Brunson winner: Gracie, a 10-time Brazilian jiu-jitsu world champion and two-time Abu Dhabi Combat Club Submission Wrestling World Championships gold medalist, unleashed his world-class grappling game on the overaggressive Keith Jardine en route to a unanimous verdict, slicing open “The Dean of Mean” with some nasty elbows from the mount. Still, his outing was not without issues. The 6-foot-4 Gracie tired noticeably in the third round and will need to find some harmony with his weight cut and conditioning. Because of his pedigree and strong start to his MMA career, Gracie becomes an immediate player at 185 pounds. The next rung on the ladder should lead him to the “Jacare”-Brunson winner.