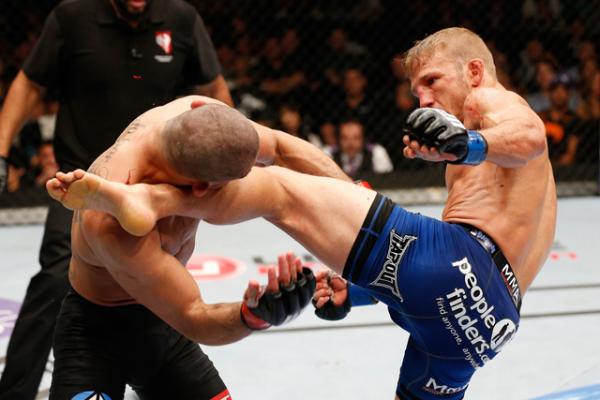 
So much for the status quo.

T.J. Dillashaw sprang a stunning upset on Saturday at the MGM Grand Garden Arena in Las Vegas, as the Team Alpha Male representative took out Renan Barao on a fifth-round technical knockout to become the Ultimate Fighting Championship bantamweight titleholder in the UFC 173 main event. Barao wilted 2:26 into round five, losing for the first time in more than nine years.

Multi-punch bursts, well-disguised kicks, relentless movement and a seemingly endless gas tank carried Dillashaw to the most significant victory of his 12-fight career. He nearly finished it in the first round and held a commanding lead on the scorecards entering the fifth. Dillashaw never allowed the Nova Uniao ace to establish himself in the fight. According to preliminary FightMetric figures, he landed 101 more strikes than Barao -- a man to whom some had pointed as the sport’s pound-for-pound best.

Now comes the difficult part, as Dillashaw becomes the hunted. The 28-year-old was not originally slated to challenge Barao for the bantamweight crown. That distinction went to Raphael Assuncao, who was forced to bow out of a proposed title fight with an injured rib. The Brazilian jiu-jitsu black belt has a built-in history with Dillashaw -- he took a controversial split decision from him at UFC Fight Night “Maia vs. Shields" in October -- and looks like the man at the front of the line at 135 pounds.

Meanwhile, Barao must smooth out the first real chink in his armor. The 27-year-old entered the cage on a 22-fight winning streak in left it having been soundly beaten. With that said, Barao does not figure to stray too far from a potential rematch with Dillashaw. Takeya Mizugaki, who has quietly rattled off five straight wins, would provide him with the chance to bounce back and position himself for another run at the title.

In wake of UFC 173 “Barao vs. Dillashaw,” here are five other matchups that ought to be considered:

Daniel Cormier vs. Jon Jones-Alexander Gustafsson winner: Cormier did what he wanted when he wanted to do it against former two-division Pride Fighting Championships titleholder Dan Henderson. The undefeated American Kickboxing Academy export grounded and neutralized “Hendo” for two-plus rounds before rendering him unconscious with a rear-naked choke in the third. To no one’s surprise, Cormier, 35, has established himself as one of the premier players at 205 pounds. Jones is expected to defend his light heavyweight crown in a rematch against Gustafsson in August.

Robbie Lawler vs. Matt Brown: Lawler wants another crack at reigning welterweight champion Johny Hendricks, and he is taking the necessary steps towards making that desire a reality. The 32-year-old American Top Team standout buried Jake Ellenberger with a third-round knee strike and follow-up punches, improving to 4-1 since downshifting to 170 pounds. On a career-best seven-fight winning streak, Brown last appeared at a UFC Fight Night event on May 10, when he dispatched onetime Jungle Fight champion Erick Silva with third-round punches.

Dan Henderson vs. Anthony Johnson-Antonio Rogerio Nogueira loser: Nearing the end of his unparalleled career, Henderson has lost four of his past five fights. The soon-to-be 44-year-old offered little resistance in his technical submission defeat to the aforementioned Cormier. Henderson spent the majority of their UFC 173 co-main event on his back, defending submissions and eating ground-and-pound. Because of his resume alone, “Hendo” figures to catch meaningful bouts for as long as he remains a fixture on the UFC roster. A rejuvenated Johnson will collide with the oft-injured Nogueira at UFC on Fox 12 in July.

Tony Ferguson vs. Myles Jury-Abel Trujillo winner: Ferguson survived an early blitz from former Deep champion Katsunori Kikuno and scored a one-punch knockout on the Japanese karateka in the first round. Kikuno had never before been stopped by strikes. Ferguson, who won Season 13 of “The Ultimate Fighter,” has compiled a 5-1 mark since touching down in the UFC in June 2011, with wins over Kikuno, Mike Rio, Yves Edwards, Aaron Riley and Ramsey Nijem. The unbeaten Jury will square off with Trujillo at UFC Fight Night “Swanson vs. Stephens” on June 28 in San Antonio.

Jake Ellenberger vs. Hector Lombard-Dong Hyun Kim loser: Ellenberger has a lot of work to do if he wants to repair his standing within the cutthroat 170-pound weight class. The 29-year-old Nebraskan has suffered back-to-back defeats for the first time in his 37-fight career. Ellenberger fell well short of the mark against Lawler, ultimately bowing to strikes in the third-round of their welterweight showdown. Lombard and Kim are booked to do battle on Aug. 23 in China.