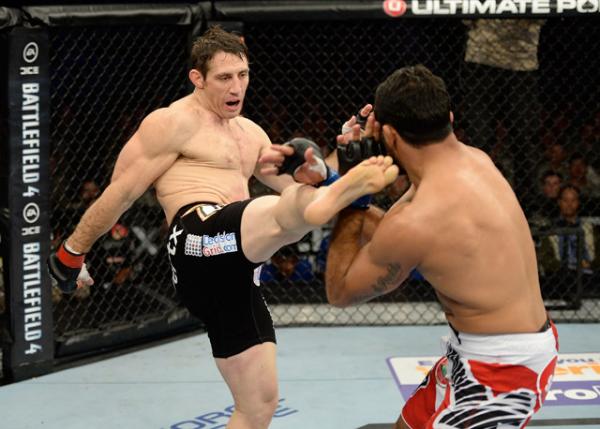 A decorated war hero an unabashed American patriot, Kennedy knocked out Rafael Natal with a leaping left hook and follow-up ground strikes in the UFC Fight Night 31 “Fight for the Troops 3” main event on Wednesday at Fort Campbell in Hopkinsville, Ky. Natal lost his grip on consciousness 4:40 into the first round, as he became Kennedy’s first knockout victim in nearly six years.

Not all went wrong for Natal. The Gracie Fusion representative scored with straight punches and low kicks, leaving visible damage to both of Kennedy’s legs. Had the fight gone deeper, such work might have paid dividends. However, the left hook changed everything. It caught Natal on the chin and sent him crashing to the canvas in a dazed and defenseless state, his adversary in close pursuit. A quick burst of punches momentarily separated the Brazilian jiu-jitsu black belt from his senses and made Kennedy a winner for the ninth time in his last 11 appearances.

While decisive in nature, the emotional victory does little to raise Kennedy’s profile within the Ultimate Fighting Championship’s middleweight division. Remember, he was originally charged with welcoming former light heavyweight champion Lyoto Machida to 185 pounds. The question of what comes next for the Jackson’s Mixed Martial Arts standout grew somewhat murky in the aftermath, as news of a torn quadriceps muscle began to circulate not long after he fed his knuckles to Natal. Such an injury could sideline Kennedy for months. If he recovers quickly, Kennedy would be wise to seek out a matchup with Francis Carmont -- the Tristar Gym-trained Frenchman who has won 11 consecutive fights, the last six of them since arriving in the UFC.

Natal’s stock does not figure to take a significant drop in defeat. A middle-tier middleweight with solid but not spectacular all-around skills, he will likely remain a mainstay on pay-per-view undercards, catching fights against the unproven prospects and resurgent veterans who populate the heart of the 185-pound weight class. “The Ultimate Fighter” Season 3 finalist Ed Herman and former title contender Thales Leites will do battle at UFC 167 on Nov. 16 in Las Vegas. The loser would make some sense for Natal.

In the aftermath of UFC Fight Night 31 “Fight for the Troops 3,” here are five other matchups that ought to be made:

Alexis Davis vs. Ronda Rousey-Miesha Tate winner: Davis extended her winning streak to four fights with a unanimous decision over Liz Carmouche. Inside leg kicks, strong clinch work and relentless pressure were her weapons of choice. At 25, the Canadian has emerged as the top contender at 135 pounds, especially with Cat Zingano sidelined by reconstructive knee surgery. Rousey will defend her bantamweight crown in a rematch with Tate in the UFC 168 co-main event on Dec. 28.

Liz Carmouche vs. Amanda Nunes: Hobbled by a series of damaging leg kicks from the aforementioned Davis, Carmouche was never afforded the opportunity to get her game in gear. The 29-year-old spent much of the 15-minute encounter circling on the outside against a superior striker, unable to draw the fight to the mat, where her punishing ground-and-pound might have taken hold. Now 1-2 in three UFC appearances, Carmouche has some work to do if she wants to climb back into contention. Nunes, one of the more promising talents at 135 pounds, put away Dutch muay Thai stylist Germaine de Randamie with a volley of unanswered first-round elbows.

Yoel Romero Palacio vs. Tim Boetsch: Palacio can only be described as a frightening physical specimen. A former world champion and 2000 Olympic silver medalist in freestyle wrestling, the 36-year-old American Top Team export wiped out Ronny Markes -- he of the seven-fight winning streak -- with a looping overhand left and follow-up standing-to-ground punches. Despite his relatively advanced age, Palacio is an intriguing talent at 185 pounds. Boetsch halted a two-fight skid at UFC 166 in October, when he eked out a controversial split decision over C.B. Dollaway.

Rustam Khabilov vs. Jamie Varner-Pat Healy winner: Khabilov’s unanimous decision win over Jorge Masvidal lacked the jaw-dropping suplexes for which he has become known, but it proved he was a legitimate threat to crack the top 10 at 155 pounds in 2014. The 25-year-old Dagestani planted his overhand right on Masvidal repeatedly and nearly knocked out the American Top Team mainstay with a spinning back kick in the third round. Khabilov will carry a six-fight winning streak into his next appearance. Varner and Healy will square off at UFC on Fox 9 in December.

Michael Chiesa vs. Yancy Medeiros: Chiesa rebounded nicely from his first defeat, as he secured a tapout from fellow “Ultimate Fighter” winner Colton Smith with a second-round rear-naked choke. A talented grappler with still-suspect standup skills, Chiesa has delivered eight of his 10 professional victories by submission, six of them by rear-naked choke. Medeiros, meanwhile, took a significant step forward in his young career, as the once-beaten Hawaiian dispatched Yves Edwards with a ringing uppercut and follow-up punches in the first round.