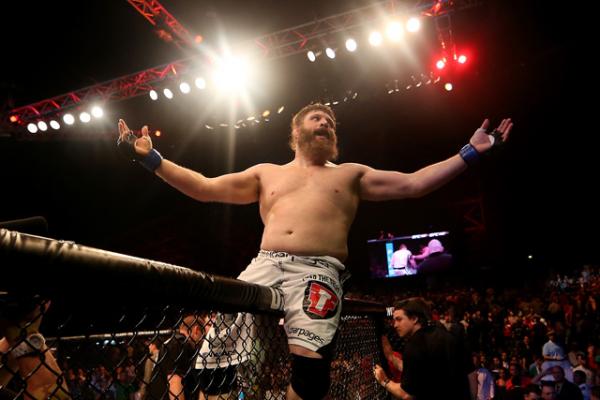 
Roy Nelson has sent his fist crashing into many a chin, both granite and glass, and the consequences are almost always the same.

Nelson posted the 13th first-round finish of his career, as he knocked out former Pride Fighting Championships titleholder Antonio Rodrigo Nogueira in the UFC Fight Night 40 main event on Friday at du Arena in Abu Dhabi, United Arab Emirates. Nogueira lay unconscious 3:37 into round one, becoming the latest victim of a “Big Country” right hand.

Few were surprised by the outcome. Once known and revered for his ability to absorb punishment, Nogueira has become less and less durable as Father Time has exacted its natural toll. Nelson set him on shaky legs inside the first minute, connecting with an uppercut and overhand right. The situation did not improve for Nogueira.

Nelson cracked the wobbly 37-year-old again later in the round, pursued him with a patient purpose and unleashed the violent right hand that drew the curtain. Nogueira, who turns 38 in June, hit the ground stiff and motionless, as he was finished for the fifth time in his past eight appearances. It was a grisly scene for those who have followed the Brazilian’s long and storied career.

Considering the lack of depth present in the Ultimate Fighting Championship’s heavyweight division, Nelson can probably have his pick among middle-tier contenders. With Alistair Overeem shelved by recent elbow surgery, perhaps the UFC can finally put the pieces together for a clash between Nelson and 2001 K-1 World Grand Prix winner Mark Hunt. The match always did make sense, and it still does.

Nogueira has led a fight-to-fight existence for more than two years. With nothing left to accomplish in MMA, he might opt for retirement following his latest setback. However, if he elects to trudge forward, a long-desired rubber match with Josh Barnett -- “The Warmaster” also finds himself on the rebound after his encounter with Travis Browne’s elbows -- could be on the horizon.

In wake of UFC Fight Night 40 “Nogueira vs. Nelson,” here are five other matchups that ought to be considered:

Clay Guida vs. Dennis Bermudez: Guida overwhelmed former Shooto champion Tatsuya Kawajiri with clinches and scrambles, rarely affording the Japanese veteran room to operate. “The Carpenter” nearly finished it in the first round, where he leveled Kawajiri with a right hand and swarmed for a potential stoppage. The “Crusher” recovered, but outside of a few attempted submissions he was not much of a factor in the co-headliner. Bermudez has made himself a person of interest at 145 pounds, as “The Ultimate Fighter” Season 14 finalist has recorded six straight wins.

Tatsuya Kawajiri vs. Dustin Poirier-Akira Corassani loser: Kawajiri wound up on the wrong side of the scorecards against Clay Guida, as he tasted defeat for the first time since downshifting to 145 pounds. With Kawajiri’s 36th birthday fast approaching, one has to wonder how much damage the loss will do to his chances of ever making real waves in the featherweight division. His last six losses have come at the hands of current or former Strikeforce, Bellator MMA, Pride and One Fighting Championship titleholders: Guida, Gilbert Melendez (twice), Eddie Alvarez, Takanori Gomi and Shinya Aoki. Poirier and Corassani will lock horns at “The Ultimate Fighter Nations” Finale on April 16.

Ryan LaFlare vs. Stephen Thompson: While LaFlare’s unanimous decision over John Howard lost a lot of its luster because of a second-round groin strike, the unbeaten former Ring of Combat champion has nevertheless started his UFC career with four wins in a row. He neutralized “Doomsday” with well-timed takedowns, survived a few run-ins with Howard’s fists and won a majority of the scrambles. Thompson stopped Robert Whittaker on first-round punches at UFC 170 in February.

Ramsey Nijem vs. Erik Koch-Daron Cruickshank winner: Nijem improved to 5-3 inside the Octagon with a first-round technical knockout against the previously undefeated Beneil Dariush. “The Ultimate Fighter” Season 13 finalist staggered Dariush with a counter left hook, dodged a guillotine choke and ultimately buried him with heavy ground-and-pound. Nijem has won back-to-back bouts since he submitted to a James Vick guillotine at UFC Fight Night 26 in August. Koch and Cruickshank will collide at UFC Fight Night 41 on May 10.

Jared Rosholt vs. Matt Mitrione: The once-beaten Rosholt may not have been spectacular, but he was undeniably effective in capturing a unanimous decision from Daniel Omielanczuk. A three-time NCAA All-American wrestler at Oklahoma State University, Rosholt grounded and grinded the Pole at will throughout their 15-minute encounter. The promising 27-year-old Team Takedown export will carry a six-fight winning streak into his next appearance. Mitrione last fought at UFC Fight Night 37 in March, when he knocked out Shawn Jordan at the Cotai Arena in Macau, China.