Georges St. Pierre spent his Saturday night successfully defending the welterweight title against number one contender Thiago Alves at UFC 100. The one-sided would-be super fight saw St. Pierre win all five rounds, even as he gutted out the last two with a groin injury at the Mandalay Bay Events Center in Las Vegas.

Afterwards, St. Pierre cemented his reputation as a textbook sportsman by lauding his opponent. He remained modest about his chances against middleweight champion Anderson Silva in a rumored cross-division duel -- the only potential fight in all of mixed martial arts that has the same box office pull as the Brock Lesnar vs. Fedor Emelianenko bout UFC President Dana White has promised fans several times over.

Brock Lesnar was also hard at work at UFC 100, successfully unifying the heavyweight crown by turning Frank Mir’s face into a post-modern painting. Impressive as he was in victory, Lesnar’s post-fight antics overshadowed both his own performance and St. Pierre’s, as the genetic freak of the Dakotas tried to restart his fight with Mir, announced plans for carnal relations with his wife and ripped Bud Light, the UFC’s biggest sponsor. In a few short minutes, Lesnar managed to join the likes of Terrell Owens and Ric Flair and come off as a crass sore winner who cannot even shake his opponent’s hand or look like anything but a muscled mass of egomania.

Flipping off the fans and mortifying your bosses may sell tickets bearing your name in the short term, but most everyone gets tired of the childish villain routine sooner or later. Back in the 1990s, Lesnar would have been right at home, as that decade saw athletes like Deion Sanders and Barry Bonds make millions while living in a me-first world that rewarded them for their on-the-field brilliance as long as the bottom line stayed in the black. Unfortunately for Lesnar, this decade begs for someone like St. Pierre; people look at the Lesnars of the world and decide class acts like Peyton Manning and Tiger Woods deserve the true superstar status.

You can thank the backlash from the steroids era and fans growing tired of seeing their favorite athletes get dragged into court on a regular basis for the fall of the sports anti-hero. Not surprisingly, Lesnar could care less, while St. Pierre maintains a carefully crafted image that has kept him in the good graces of his fans and bosses. Being the golden child, however, does not change the fact that Lesnar was the headliner on Saturday and would sell more tickets than St. Pierre anywhere outside of Canada.

That may seem like an anomaly, but every top-tier athlete like Lesnar enjoys a honeymoon period. Tito Ortiz spent years at the top of the game despite openly ducking Chuck Liddell, all the while slowly but surely alienating fans with equal doses of arrogance and inactivity. The frustration meted out to fans was second only to the hit the UFC had to take, as it spent years trying to make a light heavyweight title bout between Ortiz and Liddell, only to see the matchup materialize after it had lost its chokehold on the minds of MMA fans. 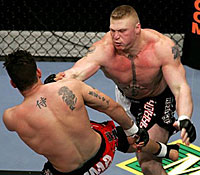 Photo by Sherdog.com
Lesnar will be a headache to
Dana White for years to come.
Dealing with an egomaniac is a dicey proposition, but the UFC needs someone like Lesnar around as long as it keeps him on a short leash. No one is going to confuse the hulking heavyweight champion for an MMA ambassador, so the extent of damage his mouth can do is limited as long as he keeps key sponsors out of his verbal crosshairs and avoids anything felonious. After all, Mike Tyson spent years knocking human beings silly and generally coming off as Brooklyn’s answer to Alex DeLarge before legal woes finally torpedoed his career and the American public grew sick of cheering for someone who sickened it. As of right now, Lesnar is a polarizing figure, but he still enjoys the support of many fans who cheer him on instead of merely cheering for his defeat.

That’s the kind of figure you need to effectively promote a sport, but it does not work without someone like St. Pierre to balance the ticket. In a bizarre sort of way, St. Pierre and Lesnar are tied to one another as the opposing sides of the same coin. As the two most bankable commodities in all of MMA, the future prospects of the UFC are heavily connected to how they handle being at the top of the totem pole. While St. Pierre feels the pressure to re-establish his greatness, Lesnar has to prove his own without letting the theatrics of his World Wrestling Entertainment days turn him into a caricature.

The ongoing argument over which man is better for the UFC is pointless; you’re never going to have an army of St. Pierres leading the way, and you’ll always miss having someone like Lesnar around to drive the fans into a frenzy. A thin line that separates Lesnar from asset and liability, but the same could have been said about Ortiz, and he still played a key role in the UFC’s ongoing siege on mainstream American sports. Once Ortiz forgot the UFC could survive without him, he became a liability and was quickly erased from the memories of his once-rabid fans by the UFC’s ruthless business machinations.

That’s not something the UFC will ever have to worry about with St. Pierre, which is why the French-Canadian virtuoso remains a safe bet to become a crossover star. The opposite holds true for Lesnar, who will be a headache for White for years to come. Still, what he brings to the table makes him well worth the price of admission. Just how long that remains true is up to Lesnar, but that’s not something about which anyone should worry. There’s never a shortage of talented athletes willing to revel in the bad guy persona, and Lesnar will hardly be the last to serve that role for the UFC.

Asking who means more to the UFC, St. Pierre or Lesnar, implies the promotion could get by without them. While Tyson was knocking people senseless, a young British heavyweight named Lennox Lewis was on his way up the ranks. Articulate, well-mannered and undeniably talented, the combat sports world flocked to him as the smooth chaser to the harsh aftertaste of the Tyson era. Now, instead of having one or the other, the UFC has both under the same banner, and that’s what matters most.

At this moment, the last barriers to the mainstream are falling, and the sport needs every single edge it can get when it’s so close to pulling off the impossible. After all, why settle for Tyson when you can have Lewis, too? The best part is that St. Pierre is a far better dancer than both and Lesnar has not yet shown a taste for human flesh. At this rate, they might someday star in an NBC sitcom together in which they play mismatched roommates. Is that not what going mainstream is all about?