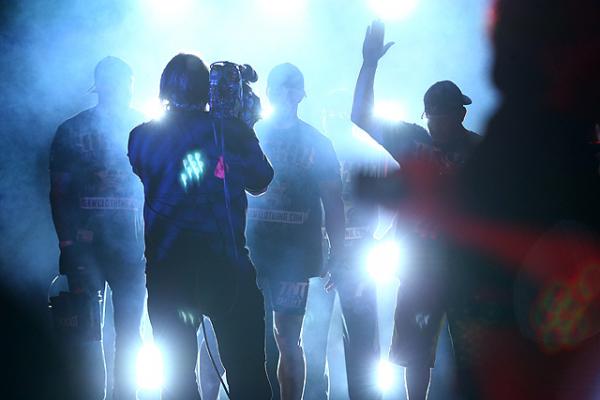 After defeating Alexander Gustafsson by split decision in the UFC 192 main event on Saturday at the Toyota Center in Houston, Ultimate Fighting Championship light heavyweight titleholder Daniel Cormier rose right above all the noise and thanked his opponent for bringing out the best in him.

Just as the second half of his walkout song -- Lil’ Wayne’s “Right Above It” -- suggests, the American Kickboxing Academy standout sidestepped talk of a rematch with former champion Jon Jones and instead praised Gustafsson in wake of their five-round classic. Cormier also approached the fight differently than most anticipated, as the Olympic wrestler chose to stand and trade with the 6-foot-5 Gustafsson in the later rounds on his way to a split decision victory.

Gustafsson entered the Octagon to a training montage from “Rocky IV” and borrowed a page from the Rocky Balboa playbook. Gustafsson stuffed all but one of Cormier’s takedowns and dealt with the champion’s relentless pressure, which resulted in a deep cut across the bridge of his nose and damage to both eyes. His heart showed in the third round, where he landed a devastating knee strike and briefly floored “DC.”

Meanwhile, former UFC light heavyweight champion and “The Ultimate Fighter” Season 2 winner Rashad Evans was brought to the cage by “Victory” from Puff Daddy and the Notorious B.I.G. However, it was opponent Ryan Bader who walked away from their co-headliner victorious. A two-time NCAA All-American wrestler at Arizona State University, Bader did his heavy lifting on the feet, where he utilized an effective jab to keep Evans at a safe distance, cut off angles and score a unanimous decision.

Finally, Jessica Eye strode to the Octagon to the Beastie Boys’ “Sabotage” and proceeded to sabotage her chances to beat “The Ultimate Fighter 18” winner Julianna Pena. The Strong Style Fight Team representative was penalized a second-round point for an illegal knee strike to Pena’s head from the bottom. The deduction cost the “Evil” one a chance to win the round and perhaps carry some momentum into round three. There, Pena took down Eye early and remained in control to secure a unanimous verdict.