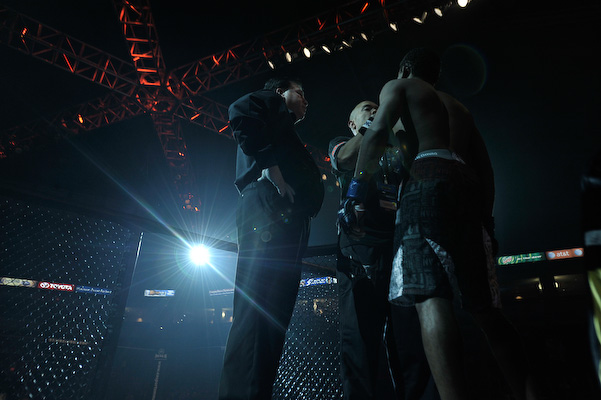 For Tim Kennedy to earn his first knockout in six years the US Army Staff Sargent needed a good training camp, a well-executed game plan but also a fine-tuned walkout song to guide him into the cage.

Fighting for the second time under the UFC banner, Kennedy picked the same early 1990s grunge rock track that helped earn him a win at UFC 162 over Roger Gracie. At UFC Fight Night 31, the towering tones of Alice in Chains’ “Rooster” were the soundtrack to Kennedy’s second win in the UFC’s middleweight division.

In the opposite corner of the “Fight for the Troops 3” main event was Brazilian Rafael Natal. A 30-year-old middleweight out of New York, Natal was in search of his fourth straight win and leaned on a popular Portuguese walkout anthem to boost his UFC entrance. Competing for the fourth time in 2013, Natal’s walkout track was “Seu Sangue” by singer and songwriter Fernandinho.

Translated to English from Portuguese, Seu Sangue means “His Blood.” Little to no blood was shed in this matchup, with Kennedy earning a first-round knockout off an unblocked left hook that sent Natal crashing to the canvas.

Alexis Davis is huge in New Zealand. Davis, out of Ontario, Canada, went with Auckland-born Lorde’s art pop jam “Royals” for her second ever UFC walk to the Octagon. A precision muay Thai striker, Davis put on her best overall performance at UFC Fight Night 31.

In search of her second UFC victory, Liz Carmouche went to an old standby in terms of walkout music selection. A winner back in July at UFC on Fox 8, Carmouche once again stepped out to the robot-voiced beats of DJ Benny Benassi’s “Satisfaction.”

In MMA only one hand is raised and satisfied in the Ultimate Fighting Championship. After 15 minutes of action, Davis’ aggressive striking and leg kick attacks earned her the unanimous decision victory. Davis joins regal company as the first woman on the UFC roster to earn two wins inside the Octagon.