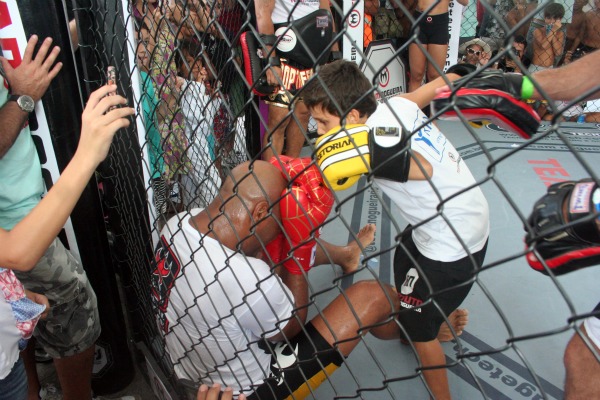 RIO DE JANEIRO -- For a few hours on Saturday morning, the people on Recreio dos Bandeirantes beach forgot about the waves and watched local heroes from Team Nogueira.

Coordinated by the Nogueira brothers, “Team Nogueira Day” featured every level of athlete, from kids to adolescents to professional fighters, standing before the public in a mini-cage erected on the beach.

“Our intention with Team Nogueira Day is to spread our sport, to spread our academy in the neighborhood of Recreio and around Rio de Janeiro, and for people to know that Team Nogueira has the largest team of MMA fighters in the world,” said Antonio Rodrigo Nogueira. “Besides having an excellent team, we have classes for all kinds of people. We are growing a lot, transforming into a network of academies; now, we have three branches in Switzerland, three in the United States, and we’re spreading throughout Brazil.”

The presentations began around 8 a.m. with a demonstration of training from some lesser-known fighters. They were followed by the children of Team Nogueira, who showed their skills in the cage under the supervision of boxing instructor Cesario Bezerra and jiu-jitsu coach Ana Maria Soares.

Antonio Rogerio Nogueira explained the workings of the team’s “boot camp” and kids programs, stressing that the work of the academy could suit any audience interested in physical activity.

“The projects are to show the public our program for children, with classes for them. We have Kids 1, which is for children 3 to 7 years old, and then Kids 2, which is 7- to 14-year-olds,” explained “Minotoro.” “We have a program specifically for women also, the Boot Camp, which combines workouts and wrestling. In addition to activities such as karate and judo for children, there is muay thai and jiu-jitsu. We have many activities for the public who are interested in being not only professional, but improving their health.”

Anderson Silva, a BJJ black belt under the Nogueiras, said the event was nothing out of the ordinary due to the strong bond between the Team Nogueira fighters and students.

“We’re like a family,” said Silva. “It’s normal to be with them at this event since we’re always together.”

UFC heavyweight champ Junior dos Santos also praised the good atmosphere of the team and said he was honored to assist the Nogueira brothers, who have helped him since the start of his MMA career.

“Team Nogueira is very important to me,” explained dos Santos. “It’s a very large family and, thank God, very strong. We care very much about focusing on training and always give our best to face the battles of life. It’s an opportunity for children to join the Nogueira brothers’ project and interact with us, with all the staff. It’s cool how they’re doing it and, for me, it’s an honor to be a part of it.”

The youngest of the pros in attendance, 27-year-old Erick Silva, also took the opportunity to leave a message of encouragement for children who believe in taking advantage of the current MMA explosion in Brazil.

“Team Nogueira now offers, for all ages, a good structure for those wanting to start. So, parents wishing to place their children should seek an environment that is extremely professional, and Team Nogueira definitely shows that they have been working hard on it,” said Silva. “All the teachers are qualified. All the people who want it and all the children who want to fight should begin training. MMA is the fastest-growing sport in the world and that makes them want to participate.”

Leonardo Fabri contributed to this report.