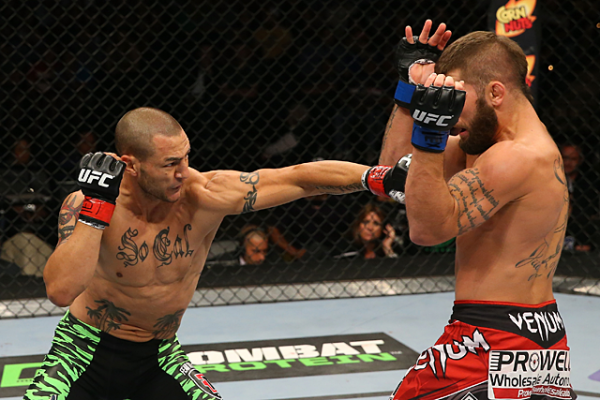 
Cub Swanson cleared what appears to be the final obstacle standing between him and a crack at the Ultimate Fighting Championship featherweight crown.

Swanson pushed his streak of consecutive victories to six with a unanimous decision over Alliance MMA’s Jeremy Stephens in the UFC Fight Night “Swanson vs. Stephens” headliner on Saturday at the AT&T Center in San Antonio. All three judges ruled in favor of Swanson (21-5, 6-1 UFC), striking 49-46, 49-46 and 48-47 scorecards for the Jackson-Wink MMA export.

Stephens (23-10, 10-9 UFC) was game but outmatched in suffering his first defeat at 145 pounds. Swanson utilized a multi-pronged standup attack and twice doubled over the California-based Iowan with body kicks, first in the third round and again in the fifth. On both occasions, he unleashed right hands to the head in an effort to secure a stoppage, and on both occasions, Stephens stood his ground.

Down on the scorecards, the underdog made his final pitch for an upset late in the fifth round. There, he tagged Swanson with multiple clubbing right hands but failed to author the finish he needed.


In the welterweight co-main event, “The Ultimate Fighter” Season 17 winner Kelvin Gastelum kept his perfect professional record intact with a unanimous decision over Nicholas Musoke. All three judges scored it 29-28 for Gastelum (9-0, 4-0 UFC).

Gastelum overcame a slow start in which he succumbed to a takedown and had his taken by the Swede in the first round. The 22-year-old Arizonan found another gear in the second, as he overwhelmed Musoke with stinging multi-punch bursts that drove him into a defensive shell. Gastelum picked up where he left off in round three, where he menaced “Nico” with punching combinations, all while mixing in kicks to the head and body.

A longtime Vitor Belfort protégé, Ferreira did his best work in rounds one and three. In the first, he drove the game Craig to the canvas behind a straight left hand and later threatened with a guillotine choke; in the third, he opened a gnarly diagonal cut on the Texan’s forehead with an exquisite standing elbow. In between, the two middleweights circled and traded.

Behind on the scorecards and leaking blood, Craig (9-3, 3-3 UFC) did not quit. He nearly pulled off a miraculous comeback in the final minute, as he staggered Ferreira with a head kick and followed up with a volley of punches. However, time ran out on the Team Tooke representative.

Dias (21-3-1, 1-2 UFC) had his moments and was particularly effective in the first round, where he blasted the onetime title challenger with brutal kicks to the lead leg. However, Lamas was persistent with his clinches and attempted takedowns. While he was rarely successful in getting the Brazilian to the ground, his efforts kept Dias bottled up against the cage and allowed the Chicagoan to pile up points in close quarters. Lamas transitioned to Dias’ back in the third round and tried a standing rear-naked choke, only to be shrugged off.


Heavy power punches and kicks spurred “The Ultimate Fighter” Season 17 graduate Clint Hester to a split verdict over Team Nogueira’s Antonio Braga Neto in a featured battle at 185 pounds. All three judges scored it 29-28, two of them siding with Hester (11-3, 4-0 UFC).

Neto (9-2, 1-1 UFC), a two-time Mundials gold medalist, controlled the first round with his grappling, as he struck for multiple takedowns, softened his foe with ground-and-pound and ultimately achieved full mount. However, the Brazilian slowed visibly in round two, allowing Hester to gain a foothold in the match. The Atlanta-based middleweight tore into Neto with kicks and punches to the head before countering a takedown into top position. Neto immediately reversed and again moved to mount, but his inability to finish proved costly.

Hester enjoyed further success in the third round, unleashing powerful punches to the head and body before surviving another Neto mount. He has rattled off seven straight wins.


Former Victory Fighting Championship titleholder Joe Ellenberger made a successful Octagon debut, as he picked up a split decision over James Moontasri in a lightweight showcase. All three cageside judges scored it 29-28, two of them siding with Ellenberger (15-1, 1-0 UFC).

Moontasri (7-2, 0-1 UFC) had his 29-year-old counterpart reeling in round one, where he tagged him with a ringing right uppercut and smashed him with ground-and-pound. Ellenberger weathered the onslaught and pushed the fight to a second round. From there, he turned the corner, utilizing takedowns and relentless topside grappling in a remarkable show of determination.

Round three saw both lightweights yield to fatigue. Ellenberger was the more active fighter down the stretch, leaning heavily on takedowns and clinches. Clearly exhausted, he collapsed to his back late in the round. Moontasri did not capitalize.

The unbeaten Ferreira (10-0, 1-0 UFC) welcomed a close-quarters battle. He lured Smith into the clinch, struck for a trip takedown and forced the American to surrender his back with punches. The no-hooks choke came next, followed by the tapout. Smith, 26, has lost three fights in a row, all of them finishes. 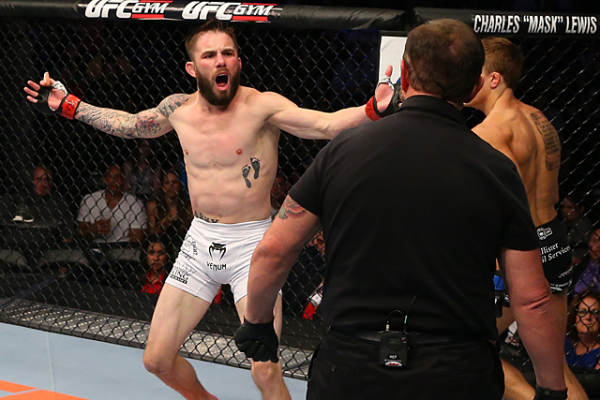 (+ Enlarge) Photo: Ed Mulholland/Zuffa/Getty
Bedford reacted harshly to the stoppage.
Tachi Palace Fights veteran Cody Gibson stopped Johnny Bedford with a looping right hand less than a minute into the first round of their preliminary bantamweight tilt. Referee Kerry Hatley called a controversial halt to the match 38 seconds into round one, despite spirited protests from Bedford.

“The Ultimate Fighter” Season 14 graduate was the aggressor from the start, as he doubled over Gibson (12-4, 1-1 UFC) with a left hook to the body and followed up with a knee to the head. The Californian answered, driving Bedford backward and landing a clubbing right hand that sent him crashing awkwardly to the canvas.

Hatley made his decision while Gibson was preparing to swarm on Bedford (19-11-1, 2-2 UFC), who was dazed but appeared conscious, lucid and able to defend himself.

Guimaraes did his best work in the second and third rounds, where he attacked the Alaskan with timely right hands and chopped down his base with repeated kicks to the legs. Enz (7-2, 0-2 UFC) enjoyed some success, particularly in round one, but lacked the necessary aggression to keep the Brazilian at bay.

The 31-year-old Guimaraes has recorded eight wins in his past nine outings.


Promising flyweight prospect Ray Borg rendered Shane Howell unconscious with a first-round rear-naked choke in an undercard clash at 125 pounds. Howell (13-7, 0-1 UFC) succumbed to the choke 2:17 into round one, his six-fight winning streak snapped.

Borg (7-1, 1-1 UFC) stuck the Bellator MMA and King of the Cage alum with a right hand before executing a single-leg takedown. The 20-year-old then transitioned from a front headlock position to Howell’s back, sinking the choke in one, smooth motion. Howell briefly freed himself, but Borg refused to be denied. He cinched the choke again with his back to the cage and finished it.

Oleinik (49-9-1, 1-0 UFC) stunned the Jackson-Wink MMA export with a pair of right hands before securing a double-leg takedown. Once on the ground, the 37-year-old Russian moved immediately to a seated side mount position and locked in the neck crank for the finish. Oleinik has won his last 10 bouts, nine of them by submission.