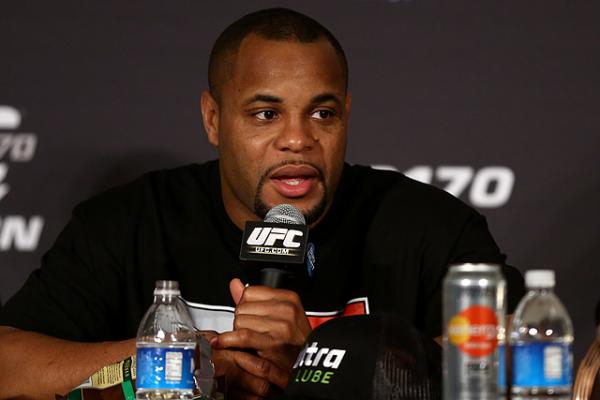 
Daniel Cormier’s light heavyweight title aspirations have been no secret since he announced his drop to 205 pounds, and the two-time Olympian only reinforced his position with a dominant win over Dan Henderson in the UFC 173 co-headliner.

Now, Cormier has his sights set on UFC light heavyweight champion Jon Jones, and “DC” is willing to wait for a shot at the belt.

“I think I’ve earned a title shot. I’ve got five top-10 wins, and I’m undefeated,” Cormier said at the UFC 173 post-fight press conference. “I haven’t lost a round. I haven’t lost a fight in two weight classes. I won the Strikeforce grand prix. My resume speaks for itself.”

Should the title picture become murky following Jones’ upcoming rematch with Alexander Gustafsson, however, Cormier said he will gladly prove himself once again against any light heavyweight in the UFC.

“I’m not saying I’m opposed to fighting. I’m just saying that after four years of what I’ve accomplished, I think I deserve a title shot,” said Cormier. “We’re going to talk, and if they come up with something good, I’ll fight. I’m not afraid of anybody. I can beat every one of these guys, so I’ll fight them all.”

Cormier manhandled Henderson Saturday night, out-wrestling the Team Quest founder and punishing him with ground-and-pound for the majority of the three-round affair before putting the ex-Pride champ to sleep with a rear-naked choke.

“You can never underestimate a guy like Dan Henderson, but I just believe in my skill. It’s something I spent a lifetime accomplishing,” said Cormier. “When kids were hanging out at the lake at 16 [years old], I was overseas wrestling at the world championships. [Wrestling is] my sport. It’s what I’ve done my whole life, and I believe in it.”

With four Octagon victories under his belt, Cormier will look toward UFC light heavyweight gold. Although the 35-year-old would no doubt accept a title shot no matter who owns the belt, “DC” would prefer to dethrone Jones if possible.

“I want to be the champion. That’s why I started fighting. We all praise Alexander Gustafsson for what he’s done. He’s a great fighter, but it means a little bit more to beat a Jon Jones,” said Cormier. “It’s like T.J. Dillashaw beating Renan Barao tonight, or Chris Weidman beating Anderson Silva. If anybody else was the champion, I don’t think it would have had the impact that it did. I would prefer for Jones to still be the champion.”

Should Cormier find himself matched against “Bones” in his next fight, he is confident that he will walk away with the title, due in large part to his world-class wrestling pedigree. However, Cormier is also aware that such a result would certainly not come easily against a champion as proven as Jones.

“That’s a tough hill to climb. There’s no ‘just beating’ Jon Jones. I’d have to have my best performance, and knowing that I was fighting for the UFC title, I would train to have my best performance,” said Cormier. “Styles make fights, and I think I match up well with him. We haven’t really seen him on his back for an extended period of time. If I get on top of him, I think I can hold him down and get some offense off.”