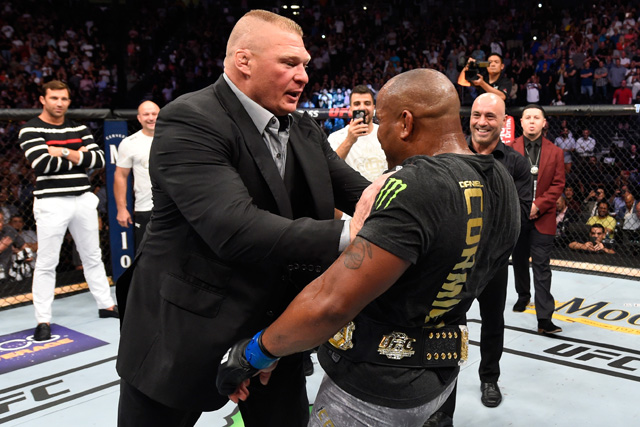 Daniel Cormier headed into his Ultimate Fighting Championship heavyweight title defense against Derrick Lewis as the overwhelming favorite, with most observers expecting “DC” to nullify Lewis’ power with his Olympic-caliber wrestling. The fight played out as expected and set Cormier up with a much-hyped showdown against World Wrestling Entertainment superstar Brock Lesnar next March in what will apparently be the champ’s swan song fight.

Cormier was a recent guest on MMA Junkie Radio and said Lesnar’s skillset and athletic ability compared to that of Lewis will provide him with a tougher challenger when the pair face-off next year.

“I think it’s tougher, because he kind of cancels out the wrestling,” Cormier said. “I can’t just go take Brock Lesnar down at will like I was able to with Derrick Lewis. And he’s big and athletic and super fast. Also, he has a size 5X glove, so if he’s able to land one of those strikes, it could be the end of the night. I truly do believe it’s the tougher fight.”

Lesnar will bring his experience as a former heavyweight champion coupled with his NCAA Division I wrestling credentials to the fight and given his size and athletic ability he could pose a few problems for Cormier. While Lesnar will have a massive size advantage over Cormier, the champion has proven time and time again how well rounded he is against bigger opponents, being undefeated as a heavyweight in spite of being the shorter and usually the lighter man in the cage every time.

The fight between Cormier and Lesnar for the UFC heavyweight title is yet to be announced as Lesnar only recently entered the six month USADA testing pool and will have to come through that before the fight is made official.