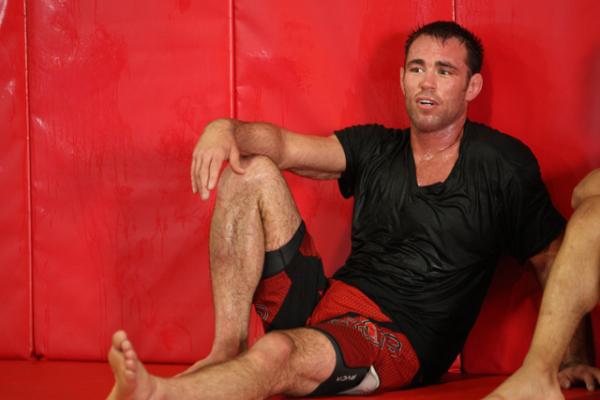 Jake Shields is not fond of Rousimar Palhares. | Keith Mills/Sherdog.com


Extensive film study has allowed Jake Shields to make some interesting observations regarding Rousimar Palhares’ will to compete.

Of particular interest was the Brazilian’s matchup with Alan Belcher at UFC on Fox 3 in May 2012, a bout which Palhares lost via first-round technical knockout when he was unable to apply one of his patented leg locks. Once Belcher escaped his foe’s submissions, he moved into full mount and battered “Toquinho” with ground-and-pound, so much so that the Brazilian appeared to be shying away from contact before the contest was halted.

Shields, who says he watched the fight “five or six times,” found the performance to be instructive. The former Strikeforce champion will challenge for Palhares’ welterweight crown in the World Series of Fighting 22 main event on Aug. 1.

“Alan Belcher did a great job of scrambling out of leg locks. He stayed composed. He did some very good things in there so I’ve definitely been watching that,” Shields said during a conference call to promote the event.

“The other thing I learned from that fight, is Palhares almost gave up when Belcher escaped. You see him just at the end of that round, and Alan gets out and the look on his face just changes,” Shields continued. “He just kind of quits in that fight. Palhares is an amazing fighter. He bullies people around; he’s an amazing athlete, but he’s also weak mentally. You can see it that fight by how he just quits.”

Palhares was released from the UFC in October 2013 for failing to release a heel hook in a timely fashion after Mike Pierce tapped out to the maneuver 31 seconds into their encounter at UFC Fight Night “Maia vs. Shields.” It was the second such instance for Palhares in the Octagon, as he was suspended 90 days in 2010 by the New Jersey State Athletic Control Board for cranking the same hold longer than necessary against Tomasz Drwal.

Like anyone who faces Palhares, Shields is well aware of his opponent’s reputation.

“He’s a dirty guy that likes to hurt people. He doesn’t let go. He plays this ‘I’m a nice guy’ after he breaks someone’s leg and doesn’t let go,” Shields said. “He’s just a bad person, so it makes me want to go out there and punch him.”

Palhares has been unstoppable since signing with WSOF, submitting Steve Carl and Jon Fitch in a combined 2:39 in his first two appearances. The reigning 170-pound king has earned 14 of his 17 career triumphs via tapout, but Shields says he is prepared for all facets of his opponent’s game.

“He has other weapons as well. He’s not known for his striking, but he can hit you with a lot of power,” he said. “He can hurt you with a shot. He’s got good armbars, good takedowns, good ground-and-pound. I think it’s easy to look past everything else because his leg locks are so dangerous, but he’s got other weapons.”

That said, Shields still believes he is the more well-rounded fighter, especially when the fight is on the feet.

“You never know until you get in there, but i think I do [have the striking advantage]. I’ve got reach on him, better boxing and better kicks,” Shields said. “I think he doesn’t like getting hit. He’s going to turn away when he gets hit. I think I can go in there and unload my hands on him.”

The Cesar Gracie Fight Team representative has been dominant in his first two WSOF outings as well, posting first-round submissions against Ryan Ford and Brian Foster. That comes on the heels of a somewhat controversial UFC release, where Shields was given the pink slip despite winning two of his last three fights. To capture WSOF gold, Shields knows that his primary objective is to exit the cage with his limbs intact. If that happens, there’s a decent chance things went his way.

“I might not care for Palhares, but he is great at leg locks,” Shields said. “He has one thing he’s amazing at, so he’s a dangerous guy.”