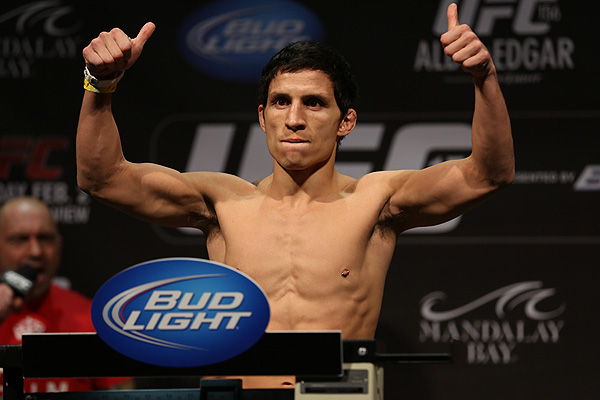 After winning a unanimous decision over Ian McCall on Feb. 2 at UFC 156, Joseph Benavidez is right back in the title mix at 125 pounds.

In a recent interview with the Sherdog Radio Network’s “Beatdown” show, he discussed his victory over McCall, flyweight champ Demetrious Johnson and more.

On the decision against McCall: “I thought it was very clear that I won the first and the third. Honestly, I think I won every minute of that fight besides the little mishap on the ground. Even that second round, I was winning until that happened, which that is another story.”

On how he got rocked in the second round: “I was rocked and I was recovering from something and I figured he hit me. When I told my cornermen, they were like, ‘Dude, you didn’t get hit or dropped by anything.’ Watching the replay, I shot directly in past him and right into his knee. I guess it just rocked my head. I was rocked down there and I thought I got punched.”

On where he stands in the division: “I think I’m right there. I think I’m the next best in the weight class. Demetrious is obviously the champion because he’s beat the next three best guys. A lot of champions, even now, even the reigning champions, they haven’t fought those next three guys. They might have wiped out the rest of the guys down there, but most of the champions haven’t fought the number two-, three- and four-ranked guys right now at this moment and defeated them. Demetrious has.”

On Johnson’s title defense against John Dodson: “I loved it. It was a champion’s performance. He was a champion. He faced adversity in the second round, and where he won the fight was the championship rounds. Everyone’s going to be skilled and powerful and be good at this and that, but he showed those other attributes he has: his heart and his cardio and those small things that separate champions from other fighters. … I was happy for him. I was happy for the weight class. It was a great showcase because also, the challenger, Dodson, fought amazing. I think he’s as dangerous as anybody for three rounds.”

On what’s next: “I’m willing to fight whoever the UFC wants me to. I’m ready for any fight. If the UFC wants to give me a title shot, of course I’m going to do everything in my power to go out there and take it and I’ll be ready. I really, really believe I can defeat ‘Mighty Mouse’ this time and fight a lot better fight. If they want me to fight someone else, I’ll just be even better by the time I do get the title shot. I think that’s inevitable at some point.”