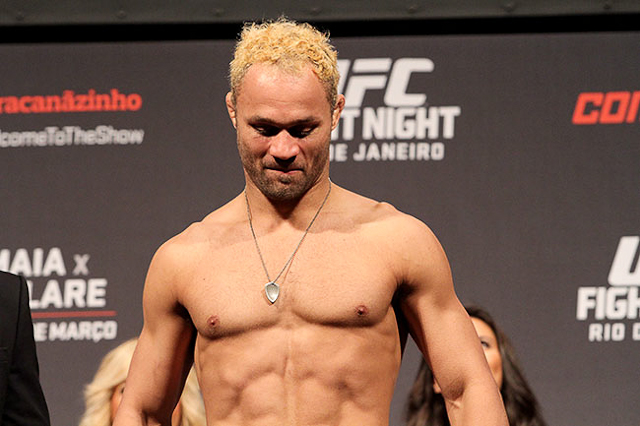 Josh Koscheck could not bust his slump on Saturday night. | Photo: Gleidson Venga/Sherdog.com


With 24 170-pound bouts under his belt, Josh Koscheck is the most tenured welterweight in the history of the UFC -- but the fights aren’t getting any easier.

“The Ultimate Fighter 1” veteran lost his fifth straight in the Octagon on Saturday, submitting to an Erick Silva guillotine choke 4:21 into the opening round of the UFC Fight Night “Maia vs. LaFlare” co-headliner at Maracanazinho Gymnasium in Rio de Janeiro. The setback comes just 21 days after “Kos” succumbed to a Jake Ellenberger rear-naked choke at UFC 184.

“Even though I didn’t get the win, I went out there and I fought hard. I see the way I fought this fight compared to the last one as an improvement, so we’ll see what happens.”

Koscheck threw caution to wind against his explosive Brazilian opponent. While the former NCAA national champion wrestler was unable to take Silva down, he consistently marched forward, throwing winging overhand rights that often connected with nothing but air. The aggressive approach was by design, he said.

“That was the plan. It was go in there and get in his face and throw some leather on him and see what we can do,” Koscheck said. “If the takedown comes, take him down. I feel confident that I can stand with anybody. He hit me with a couple good punches, but I got my hands on him a little bit. It’s disappointing because I worked so hard, but we’ll see.”

After the bout, Koscheck had a chance to talk with UFC President Dana White, who admittedly holds a special place in his heart for all the cast members of “TUF 1.”


I have a soft spot for season 1 guys. Koscheck has always been a fight anyone, anytime and anywhere like tonight. #respect


“I got to speak with Dana in the back,” Koscheck said. “We’ll see what happens. Maybe I’ll be getting a Fox Sports job, you never know.”

Despite his recent struggles, as well as the tone of that statement, the 37-year-old did not commit to retirement. Before any decisions are made, he’d like to have a longer talk with White.

“I can’t comment on that right now. I need to go home. I need to re-evaluate life, re-evaluate my career. Just kind of take some time away,” Koscheck said. I told Dana, I’ll call you in a couple weeks and we’ll figure out something. I told him I’d like to fight somebody my own age for once.”

When they do talk, White has a pretty clear idea of the direction he would like the conversation to go. In his mind, Koscheck riding off into the sunset wouldn’t be such a bad thing.

“I’m gonna try to push him in that direction,” White said.