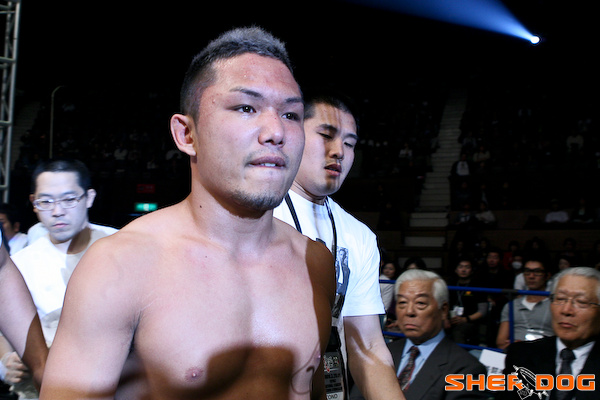 In a rare move, the executive committee of Japanese promotion Pancrase has overturned the result of a bout from the organization’s March 11 “Progress Tour” event.

Pancrase officials Wednesday announced that Seiya Kawahara’s first-round knockout of Yuta Numakura has been ruled a no-contest upon review due to unsportsmanlike conduct after the bell.

Kawahara, a product of the Pancrase-affiliated Team Fight Suns, dropped Numakura with a right hook late in the opening frame of their bantamweight matchup at Differ Ariake in Tokyo. Numakura scrambled back to his feet, only to be felled by another right hand. This time, Kawahara stood over his downed opponent and knocked him cold with a pair of soccer kicks to the head -- a legal maneuver under the rules of Pancrase.

The foul occurred after referee Yoshinori Umeki dove in to separate the fighters. Kawahara attempted to move past the veteran official in order to continue punching his unconscious opponent. Umeki managed to push Kawahara away, though not before Kawahara connected with a punch to the back of Numakura’s head. Kawahara continued flailing until he was restrained by a forearm choke from his cornerman, Ryo Kawamura, who also serves as Pancrase’s executive president.

In addition to the no-contest ruling, Pancrase has demanded that Kawahara forfeit his full fight purse from the bout and has removed him from the company’s internal rankings. The 24-year-old Yokohama native has also been suspended from competition until May 1.