ST. LOUIS -- Jake Shields made a successful leap in weight, as he defeated former EliteXC middleweight champion Robbie Lawler with a beautiful guillotine choke on Saturday in the Strikeforce “Lawler vs. Shields” main event at the Scottrade Center.

“I’m a big fan of Robbie’s,” Shields said. “He’s one of my favorite fighters out there. Just happened to be my night tonight.”

Shields had problems getting the fight to the ground in the early going -- a potential problem against the big-time striking skills of his opponent. Lawler used his solid takedown defense to keep Shields at bay.

Plan B for Shields seemed to be to keep Lawler in tight to avoid his deadly hands. It was a good plan. From the clinch, Shields locked up a standing guillotine before jumping to guard. Lawler (16-5, 1 NC) tried to slam his way out of the submission but it was to no avail. He tapped out of the catchweight bout at 2:02 of the first round, giving Shields the big win.

“I settled in a little bit,” Shields said. “Once I got it, I wasn’t letting go.”

After the fight, Shields (23-4-1) made it clear he wants to stay up in weight to face Strikeforce middleweight champion Cung Le. He might have to wait a while, considering Le recently stated there might be an interim champion crowned due to his busy acting schedule. 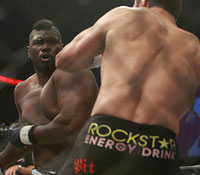 
Brett Rogers told anyone who would listen that he was going to knockout Andrei Arlovski in the first round. Not too many people believed him, but they may start listening to the undefeated heavyweight after his 22-second dismantling of the former UFC champion.

Rogers (10-0), after taking a short leg-kick, stormed in on Arlovski, backing him into the cage with a left hook that seemed to stun him. Along the cage, Rogers unleashed a combination that culminated with a right hook that separated Arlovski from consciousness.

“I felt like he was hesitating,” Rogers said. “I just went after him. I was hungry.”

The surprising win puts Rogers at the top of the list of heavyweight title contenders for Alistair Overeem’s Strikeforce crown.

“I’m going to keep it going,” Rogers said. “I love this sport. I’m ready for anybody. Most importantly, I want that title.”

Arlovski (15-8), meanwhile, will have some soul-searching to do after suffering back-to-back knockout losses.

Nick Diaz continued his successful run, as he notched his fourth consecutive victory with a rear-naked choke submission of Scott Smith.

Diaz (20-7) was extremely impressive over two-plus rounds, battering Smith at every turn. His eccentric personality gets all the headlines, but his defensive boxing is a big key to his success. Smith possesses some heavy hands, but he could not find his mark, as Diaz cut angles and slipped nearly every big shot he threw.

“Don’t believe everything you see on TV,” Diaz said. “It’s all part of the show.”

In the end, the frenetic pace Diaz set was too much for Smith (16-6), who succumbed to a slew of digging body shots. Diaz dropped him near the end of the second round, and Smith’s return for the third was in doubt. After struggling to his stool, he made it clear he would come out for round three.

Though noble, it might not have been the best decision. Diaz pummeled him with a massive volume of shots before dropping him again with another body shot. He mercifully followed him to the floor this time and sank a fight-ending rear-naked choke. Smith tapped out at the 1:41 mark of the third round. 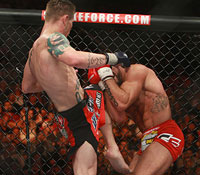 Joe Riggs thoroughly dominated Phil Baroni from bell to bell. The veteran mixed martial artist put on clinic, utilizing all facets of the game. Baroni did well to survive the 15-minute beating.

Riggs (30-10) outwrestled Baroni in the first round, taking his back in the process. Though he could not sink the rear-naked choke, he did control the round. He kept Baroni off balance and never let the flamboyant New Yorker find his range on his feet. A frustrated and weary Baroni (13-11) could do little to muster any offense in rounds two and three, while Riggs began to tee off on the feet. He landed crushing combinations at will, swelling Baroni’s left eye in the process.

In the post-fight interview, Riggs said he thought he broke both of his hands during the bout. He also made known his wish to fight Shields, the former EliteXC welterweight champion.

Mike Whitehead earned a unanimous decision victory over former UFC heavyweight champion Kevin Randleman with identical 29-28 scores from all three judges. The tight back-and-forth affair began as more of a wrestling match than an MMA fight, but that worked to Whitehead’s advantage.

After taking the first two rounds largely by taking Randleman (17-13) to the mat and working from the top position, Whitehead got a scare in the third. His conservative game plan got derailed by a Randleman left hook about two minutes into the round. It looked close to being over when Randleman pounced on his fallen opponent, clubbing him with punches. A totally defensive Whitehead (24-6) scrambled to his feet, however, and clawed his way back into the fight. Whitehead finished strong, landing a nice combination and scoring yet another takedown to secure the victory.

Despite the win, Whitehead was visibly upset with his performance. He paced the cage shaking his head in disgust.

Rafael "Feijao" Cavalcante was supposed to fight for a title but was forced to the undercard when Renato “Babalu” Sobral dropped off the show. One has to question his motivation coming into his bout with Mike Kyle. “Feijao” did not look fit as he entered the cage, and it showed in his performance.

After a lackluster first frame, which saw little action from either fighter, Kyle turned up the heat in the second. “Feijao” hit a double-leg takedown to start the round and looked to be in control as he passed to mount and punished Kyle with punches. That would be it for Cavalcante’s offensive output.

Kyle (12-6-1) seemed to find a second gear after escaping to his feet, while “Feijao” looked like a spent fighter. Kyle stalked the Brazilian before landing a crushing right hand that crumbled Cavalcante (7-2) to the canvas. He followed with three more rights that finished off “Feijao” before referee Mike England came to his rescue at 1:55 of the second period.