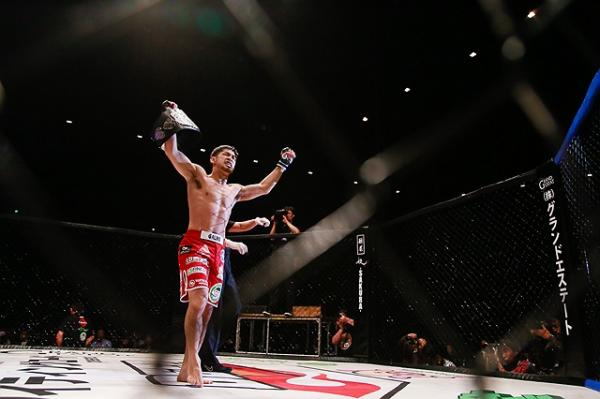 Shintaro Ishiwatari will go in search of win No. 20 in December. | Photo: Taro Irei/Sherdog.com


Reigning bantamweight King of Pancrase Shintaro Ishiwatari will return from a year-long injury layoff to defend his crown against top contender Victor Henry at Pancrase 273.

Pancrase on Tuesday announced the championship matchup, one of the first bouts added to a Dec. 13 card expected to stream live on UFC Fight Pass from Tokyo’s Differ Ariake arena.

Ishiwatari, 30, spent the past 10 months on the sideline after rupturing the triceps tendon in his left arm during training in January. The Osaka native has gone 10-2-1 since joining Pancrase in 2011, with those losses coming against Kyoji Horiguchi in 2013 and Jonathan Brookins in a November 2014 non-title fight. In his most recent outing on New Year’s Eve, Ishiwatari became the first man to knock out former Deep champ Takafumi Otsuka in the latter’s 30-plus fight career.

Henry, 28, has gone 2-0 in Pancrase and 4-0 overall in Japan, recording impressive finishes against the likes of Hideo Tokoro and Masakatsu Ueda. The Josh Barnett pupil earned his title shot earlier this month by taking out Hidekazu Fukushima with a first-round guillotine choke at Pancrase 270.