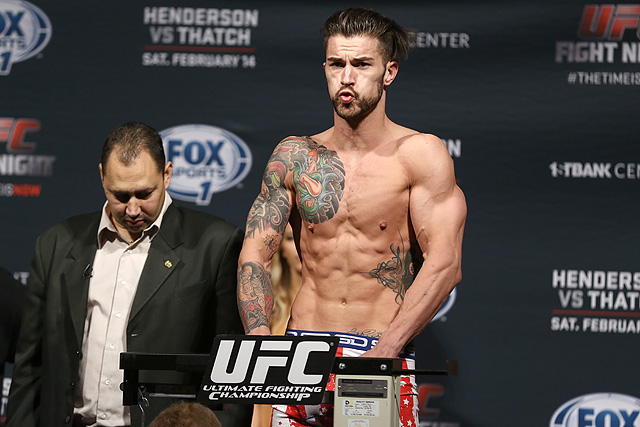 
John Hathaway’s withdrawal from UFC 189 has resulted in some fight card shuffling for the July 11 event.

Brandon Thatch, who was initially scheduled to face John Howard on the UFC 189 undercard, has been tabbed to replace Hathaway against Gunnar Nelson on the pay-per-view bill. Meanwhile, Irishman Cathal Pendred has agreed to meet Howard in a preliminary matchup. The Las Vegas-based promotion revealed the changes on Tuesday.

Thatch suffered his first loss in nearly seven years this past February, as he was submitted by ex-lightweight king Benson Henderson at UFC Fight Night in Colorado. Prior to that defeat, the Elevation Fight Team product had finished 10 consecutive opponents inside of a round.

Nelson, meanwhile, tasted defeat for the first time in his career at UFC Fight Night in Sweden, where he dropped a split decision to Rick Story on Oct. 4. The 26-year-old Iceland native was victorious in his first four Octagon appearances.

Pendred is coming off a lackluster victory over Augusto Montano at UFC 188 on June 13. The former Cage Warriors titlist is unbeaten in his last 12 bouts, including four in the UFC. Howard enters the pairing on a three-bout skid, most recently falling to Lorenz Larkin via first-round TKO at UFC Fight Night “McGregor vs. Siver.”