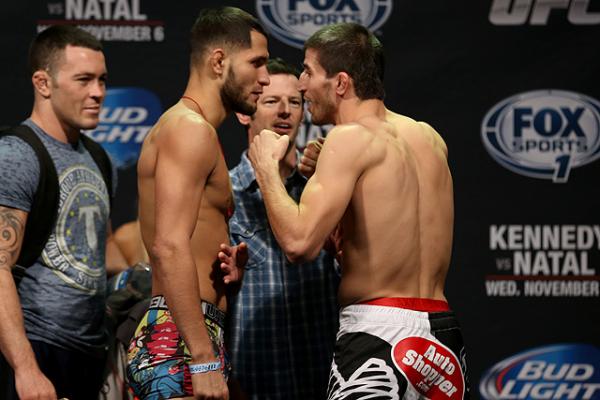 
Four men walked away from UFC Fight Night 31 with post-fight bonuses in hand, including main event winner Tim Kennedy, who earned “Knockout of the Night” for his first-round stoppage of Rafael Natal.

Kennedy pocketed $50,000 for his efforts, as did Michael Chiesa, who was awarded “Submission of the Night” after stopping Colton Smith to open the evening’s main draw. Meanwhile, Rustam Khabilov and Jorge Masvidal picked up “Fight of the Night” honors for their three-round lightweight affair from Fort Campbell in Hopkinsville, Ky.

Kennedy was measured in his approach through the majority of round one, pursuing Natal while fending off low kicks from the unorthodox “Sapo.” The ex-Army ranger suddenly exploded, however, dropping Natal with a hard left hook and then pounding him out with just 20 seconds remaining in the frame.

Earlier, Chiesa weathered an early storm from Smith, who caught the “TUF 15” winner’s back and threatened with a rear-naked choke in round one. Chiesa then responded in the second, dumping Smith on his head with a hip toss before cinching his own rear-naked choke to force the tap out.

Khabilov and Masvidal traded tit-for-tat over 15 hard-fought minutes, with neither man able to gain a definitive advantage until the Dagestani dropped Masvidal with a wild spinning hook kick to the neck in round three. Though Masvidal recovered from the blow quickly, he came up short on the judges’ scorecards, falling via unanimous decision.