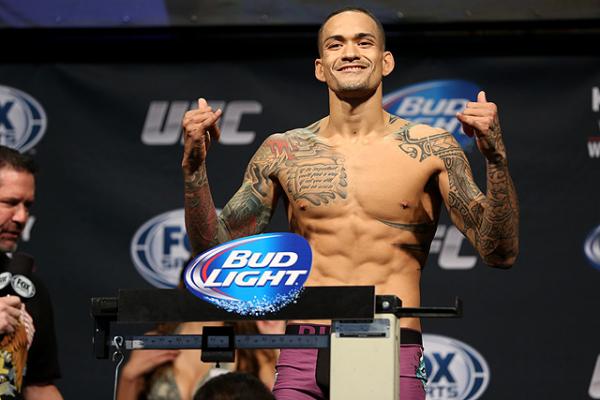 Yancy Medeiros has one less win on his record today. | Dave Mandel/Sherdog.com

As a result, Medeiros was suspended 90 days retroactive to the Nov. 6 fight date, and his knockout win over Edwards was changed to a no-contest. Also known as “UFC Fight for the Troops 3,” the event took place at Fort Campbell in Hopkinsville, Ky., and was overseen by the Kentucky Boxing and Wrestling Authority.

“UFC lightweight Yancy Medeiros tested positive for marijuana metabolites following his bout against Yves Edwards at UFC Fight for the Troops 3 in Fort Campbell, Ky., on Nov. 6, 2013,” the UFC stated in a release. “He was informed that his positive test violated the UFC Fighter Conduct Policy and Promotional Agreement with Zuffa, LLC. He agreed to and served a 90-day suspension retroactive to the event, and must pass a drug test before receiving clearance to compete again. The outcome of his bout against Edwards was changed to a no-contest.”

With his suspension now completed, Medeiros is still expected to compete against Joe Ellenberger this coming April at UFC 172. The 26-year-old began his career in 2007 and posted nine straight victories before suffering his first setback in his Octagon debut, as a thumb injury prematurely halted his UFC 159 clash with Rustam Khabilov.