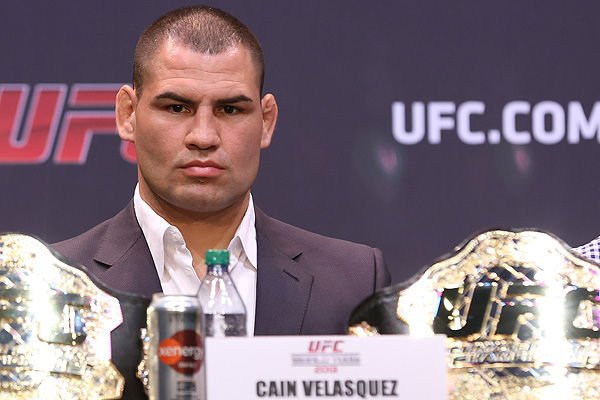 Velasquez removed any doubt as to who is the best heavyweight in the world by administering a brutal beating to Junior dos Santos at UFC 166. The final bout of the trilogy was never really in doubt, as the American Kickboxing Academy representative dominated in the clinch and rarely allowed his opponent any space to unleash his formidable boxing. Velaquez is scheduled to defend his title against Fabricio Werdum at UFC 180 in Mexico City following a coaching stint opposite the Brazilian on “The Ultimate Fighter: Latin America.”

No one can question the heart of “Cigano,” but the former heavyweight titleholder is likely to remain exactly that as long as Cain Velasquez sits atop the division. The Brazilian was unable to deal with the constant pressure of the American Kickboxing Academy standout at UFC 166, eventually losing via technical knockout in the fifth round. Having recovered from a thumb injury that has shelved him for almost a year, dos Santos will headline UFC on Fox 13 against Stipe Miocic on Dec. 13 in Phoenix.

After an extended layoff, Werdum cemented his status as the division’s No. 1 contender with a decisive five-round verdict against Travis Browne at UFC on Fox 11. Rather than control the bout through his grappling as expected, “Vai Cavalo” utilized a multi-faceted striking arsenal to batter the 6-foot-7 Hawaiian. Werdum will challenge reigning champion Cain Velasquez when the promotion makes its inaugural journey to Mexico for UFC 180.

After a remarkable 2013 campaign that saw “Hapa” notch triumphs over Gabriel Gonzaga, Alistair Overeem and Josh Barnett, the Jackson-Wink MMA product came up short in a five-round battle against Fabricio Werdum at UFC on Fox 11. While many expected Browne to hold an advantage on the feet, Werdum outstruck his foe for the majority of their 25-minute encounter to capture a unanimous decision. The Hawaiian will return to the Octagon at UFC 181 in December, when he takes on Brendan Schaub in Las Vegas.

Hunt’s heavy hands claimed another victim on Sept. 20, this time sending Roy Nelson down for the count by way of second-round uppercut. The 40-year-old New Zealander continues to author an improbable late-career comeback; he is now 5-1-1 in his last seven outings, with his only loss coming against top Brazilian big man Junior dos Santos.

Barnett entered UFC 168 as the odds-on favorite in his showdown against Travis Browne, and a win was expected to propel “The Warmaster” into the title discussion. The former UFC heavyweight champion’s significant edge in experience proved meaningless, however, as a series of vicious Browne elbows ended Barnett’s night just 60 seconds into their encounter.

When former champion Junior dos Santos dropped out of “The Ultimate Fighter: Brazil 3” Finale headliner, Miocic was left with a bout against late replacement Fabio Maldonado. The heavy-handed Ohioan showed why he is considered one of the heavyweight division’s top talents by blasting through the overmatched 205er in just 35 seconds. Miocic will get his match with dos Santos at UFC on Fox 13 in December.

After barely edging Brendan Schaub in a June split decision, few expected Arlovski to excel against Antonio Silva, a man to whom he had already lost in 2010. The former UFC heavyweight champ proved the oddsmakers wrong by rendering “Bigfoot” unconscious with a violent barrage of punches on Sept. 13, marking Arlovski’s first four-fight win streak since 2008.

Silva returned from a nine-month suspension for elevated testosterone on Sept. 13 with plenty to prove, especially fighting for the first time in his home country of Brazil. Unfortunately for “Bigfoot,” he encountered a much different Andrei Arlovski than the one he faced in 2010. The Belarusian turned out Silva’s lights with punches in less than three minutes, leaving Silva winless in his last three fights.

It was a foregone conclusion that Nelson and Mark Hunt’s Sept. 20 bout in Japan would end in a knockout, but it was shocking nonetheless to see “Big Country” put to sleep by the “Super Samoan.” Nelson’s chin, which held up in three-rounders with Stipe Miocic and Junior dos Santos, could not handle a huge, second-round Hunt uppercut.